We decided to check out another windsurfing area while we were in the neighborhood--San Luis Reservoir.

It consists of two bodies of water, the main reservoir and the O'Neill Forebay.   Here's an aerial photo showing this rather unusual configuration.  What you can't really tell from this picture is just how enormous the dam is in between. 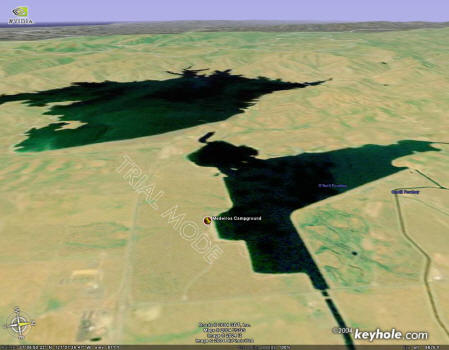 You can windsurf in either, but the main reservoir sounded a little scary due to size, wind strength, and temperature, so we decided to make the Forebay our base of operations.  If it's good enough for ABK to use for their windsurfing clinics, we figured it would be good enough for us.

We first checked out the nice, fully equipped campground on the north side of the forebay.  It was pretty deserted (just how we like 'em), but it had a stated 30 foot limit on RVs.  Sometimes they list such limits due to real physical limitations and sometimes they do it just out of policy.  In this case it was both, in that our 40-footer could have fit in several of the spaces by simply hanging over the pavement in the back, except they had gone out of their way to put up obstacles to ensure that nothing over 30 feet could fit there.  Boo, hiss.

So we went to the "undeveloped" south side of the forebay, to the Medeiros Campground.   When we showed up, there was one campsite with a man and a woman sitting at the table, and two cars.  We suspected some sort of assignation and moved on down to an even more unpopulated area.  By that night, we were the only people there, and it was a little spooky.

There are no electrical or water hookups, and since there were no people, either, running the generator wasn't going to bother anybody but us, so dry camping worked out quite well.

We did need some water and availed ourselves of the central water spigot they had, which gave us our first opportunity to use a nifty RV device, the water thief.  Some places will strip the threads off the spigots in order to prevent people hooking up a hose.  The water thief uses a rubber gasket thing that just slides on over those stripped threads and while isn't a perfectly leak-free solution, it does work.   Very handy and highly recommended.  The handle was one of those that you have to hold on to in order for it to work, but vice grip pliers took care of that detail nicely, and if the gouges all over the handle were any indication, we were hardly the first to think of it.

But on the windsurfing front...I don't think you have to be a meteorological expert to realize that the glassy waters seen below weren't exactly harbingers of great sailing conditions.

But it was real pretty, and nice weather, and quiet, so we liked the site, even wind-free.

The wind did actually blow one day, and pretty dang hard by that afternoon.  I'd heard a weed fin was necessary, but that was all right because they're also necessary where we sail in Corpus, so we've got them.  The typical fin on a windsurf board is more or less vertical, but if there are weeds in the water, the fin will catch them and that big clump will do a real number on one's speed.  Weed fins have a steep rake to them which makes the weeds slide off.

That's the theory, anyway.  The weeds in Corpus are these stringy grass type things, maybe a foot long.  They really do slide right off a weed fin, and if you hit a big clump of them you'll definitely notice, but it's never been a huge deal.  The weeds at San Luis Reservoir, on the other hand...

Yikes!  For one thing, these particular man eating weeds actually make the water smooth rather than choppy, so a smooth water maven like me has to force herself into the bumpy water.   But even worse, they're really long and bushy and assuming you DO make it out of the water, the weeds are hanging off every square inch of you and your equipment, and you look like some sort of monster from beneath the sea.

There were times when I was trying to waterstart (letting the sail pull me up out of the water), and the weeds just wouldn't let go of my legs.  Gad, it was annoying.

I still managed to sail a little, and Carey inched his way upwind of the weeds and into a very windy portion of the lake and had a rip roaring time.  In the picture below, you can see the darker water at the top--that's wind doing that. 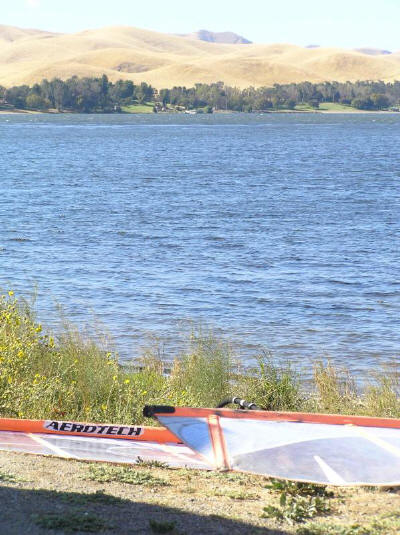 After a couple of days here, it finally dawned on us that we had been here before.  Well, almost.  About two years earlier we had stayed overnight in an RV park on the Interstate about three miles away in Santa Nella during our maiden voyage back from Portland in our new RV.  Then, neither of us realized there a great windsurfing location nearby (apparently we were too distracted by the McDonald's across the street).  It wouldn't have mattered of course, since we didn't have our equipment, but it didn't speak well for our ability to sniff out the good spots.  Fortunately, we now have the internet available for such work.