"Surfing the World's Widest Wood in Sequoia and Kings Canyon"

Carey had been through this part of California before, but I never had, and even he hadn't made it to Kings Canyon, so we did the tourist thing.

Which includes getting lost in Fresno.  Their street signage is a bit unique, which is never a good thing when it comes to methods of communication.  Consequently, many out-of-towners take a left on what they think is marked as the road to Sequoia National Park, and it just isn't.  However, after about 10 miles, there's a little restaurant where the friendly lady will tell you how to get to the proper road, and comment that several people a day come in asking the very same question. 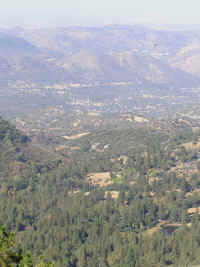 But once we got into the mountains, the sky was clear and we were ready for some nature at Sequoia National Park. 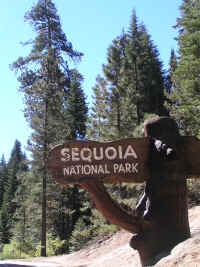 Basically a whole bunch of big trees that I didn't know anything about.  I learned, for example, that they have this special spongy bark that can get to be a couple of feet thick and acts like asbestos, protecting the business part of the tree from burning, and from insects and fungus as well.  And these aren't the tallest trees around--that title belongs to Redwoods--but they're the biggest because of their mass.  These things are just huge, and it sounds crazy, but in person, it's hard to comprehend just how big they are.  It's only when I see pictures that I really think, "Gosh those are gigantic trees."

Maybe it's because there are so many of them.  Suddenly, you're surrounded by dozens of trees that are hundreds of feet tall.  And their branches are like six to ten feet in diameter, which by itself would make for a pretty impressive tree.  It's just all on a scale that's pretty much impossible for me to comprehend. 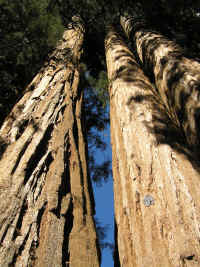 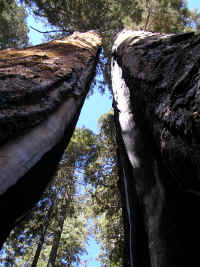 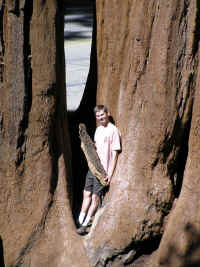 Here is Carey on the approach to the General Sherman tree, the largest tree in the world ("by volume," they always clarify). 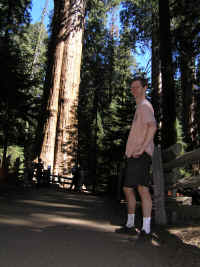 We couldn't get it all in one picture. 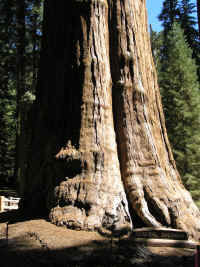 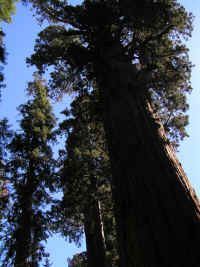 Tim McGee, I hope you're proud of yourself.

And of course the obligatory driving-through-tree photo--"Tunnel Log."  The vertical tree that you used to could drive through fell down in the 1960s, and it was in Yosemite, not Sequoia National Park.

Here is Carey answering the call of nature: 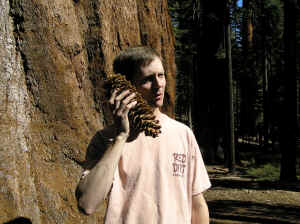 And this is me standing at the base of one of these monsters with a split in it. 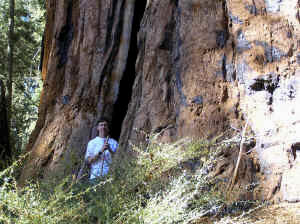 In the 1800s, a guy made one of the trees into a house (it's called Tharp's Log).  He did a really swift job of building and furnishing it, and this was probably my favorite place in the park.   He kept cattle in the nearby meadow.

In another part of the park is Moro Rock, a big granite dome with about 400 steps that lead to the top, which overlooks the Great Western Divide.  The very impressive steps were blasted into the side of the dome, and I can't believe they let people climb them--that's a sheer cliff off to my left. 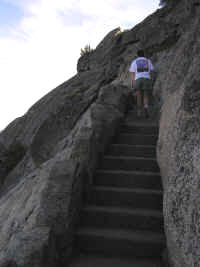 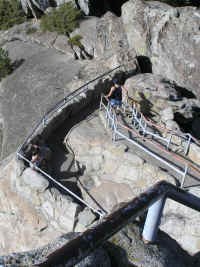 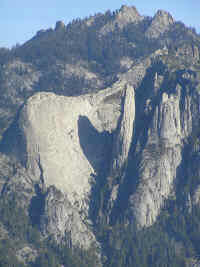 The excellent Giant Forest Museum is deep in the park, in what used to be a market.

The parks in this area were once quite heavily developed--there was even a gas station right by what is now the museum.  But the National Park Service is trying to restore many areas to a more natural setting, with pretty impressive results.

At the end of the day, we visited Kings Canyon National Park.  It's adjacent to Sequoia National Park and they're sort of run as one park, but it features its own sequoia groves, including the General Grant tree. 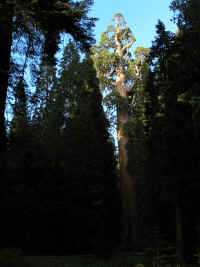 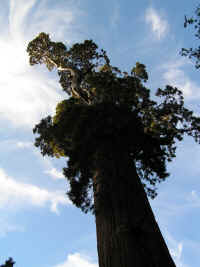 It's known as "Our Nation's Christmas Tree," which didn't make any sense to us upon seeing it, so I looked it up.  Well, legend has it that in 1924, some little girl was looking at the tree and exclaimed, "What a wonderful Christmas tree it would be."  Presto, it became our nation's Christmas tree.  How stupid is that?  It doesn't look anything like a Christmas tree, isn't shaped even remotely like one, and there's no place to hang ornaments because the branches don't even start until something like 100 feet in the air, and even if you could somehow reach them with a helicopter or something, they're so ridiculously oversized that the ornaments wouldn't hang well anyway, and of course everybody would have to use binoculars to see the damn things.  Sheesh.

I'll stick with more accurate monikers, like "Telescope Tree" or "Tunnel Tree" for this one: 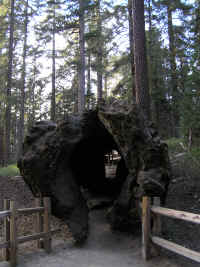 This is the underneath of a tree that fell over: 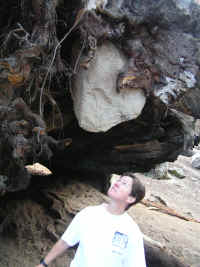 Its roots worked their way around a boulder in the ground, and brought it up with them when the tree was uprooted.  That boulder isn't going anywhere--I tried to dislodge it, to no avail.

Thus ended our big day of big trees.  There's a whole slew of great photos in the slideshow.  The slideshows of Sequoia / Kings Canyon and Yosemite (up next) are really the highlights of this update, so don't miss em'.