"Livin' Large at the Voyager RV Resort and Exploring Tucson"

We came to Tucson because that's where the Driving School Association of America's annual convention was, and I was here to help Road Safety promote our new training simulator.

I am developing the simulator's software from my "motorhome-office" while on the road, in conjunction with several other folks scattered around the country.  We all work together by using the internet for email, instant messaging, and to transfer source code, graphics, and audio files back and forth.

So a key thing I looked for when selecting an RV park in Tucson was internet access.  The Voyager RV Resort featured wireless internet ("WiFi") through an outfit called RVWiFi.com, which is setting up a network of hotspots at RV parks all over the southwest.  Even with a super duper "long range" box borrowed from the owner of RVWiFi, we had quite a bit of trouble staying connected to the wireless network.  When the WiFi signal was strong enough and it would stay connected, the service was wonderfully fast.  But it was also very frustrating to endure long unpredictable periods trying to get it to connect.  [And the dialup modem--don't even mention those words in my presence.]

The problem is that Voyager is an absurdly large RV park.   Before coming here, we had found some reviews on the internet where some folks complained about having to walk some 8 blocks to empty their trash.  We naturally figured that these were just typical internet crackpot exaggerations, but it turns out to be true.  [But they come pick it up at your site on Wednesday mornings, and the trash compactor is right near the front office (in the area near the laundromat, tanning salon, massage place, ping pong room that doubles as a medical clinic on Tuesday and Thursday mornings, and hair salon), so you go right by it on your way out.]

This place is the Best in the Nation.  How do I know this?   Because it says so right on it, as you can see below: 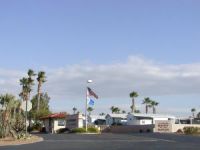 This sprawling gated suburb of Tucson accommodates a mixture of transient RVers like us and semi-permanent residents in "Park Models," which are small, permanently affixed manufactured houses.  They're often occupied by people who are wintering down here and who don't have an RV but like the social scene and amenities that RV resorts offer.  [A lot of RV parks are putting in more and more park models, and it makes the camping-type RVers mad because they think the park-model dwellers are clique-ish and that the parks cater to the more permanent residents.   Since I'm not into getting to know people I just happen to be living near temporarily, I don't really care who's in what clique, and would be happy if everybody would just leave me alone.]

The Park Model dwellers tend to set up really elaborate yard decorations, such as this tennis diorama made of pebbles: 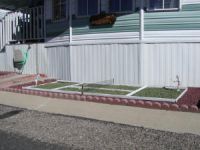 [When I took that picture, I was trying to get low (eye level) while on skates, which is always a spectacle.  The guy who lives there came out and told me I'd better be quiet so I don't make them miss a shot.  He then admitted that he needed to work on straightening the lines, and I agreed that tennis court maintenance is never-ending, second only to a swimming pool.]

We were on the far edge of the park, on relatively deserted 11th Street, which filled in day-by-day as folks arrived from colder places to wait out the winter.  They have designated areas for people with pets (we never tell them about Chucky because, like all pet owners, we think ours is different and should not be subject to rules designed those other people's pets, the ones that always cause all the problems), and we were right on the edge of the no-pet section, and the pet types like to be down near the entrance to the dog run, which I think explains the big gap.  Either that, or they just didn't like the looks of us. 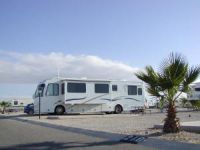 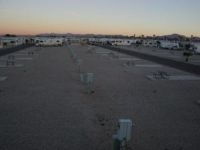 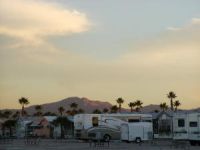 Tucson is home of Davis-Monthan Air Force Base, and there are planes constantly flying in formation overhead.  And usually not just cruising around, but performing as if they're in an airshow.

This park had a rule against pretty much everything, except they did allow washing of RV's, so Debbie took advantage of that one day and scrubbed our rubber roof, a big job made somewhat easier with a special "brush on a stick" tool had bought a while back during one of our Camping World shopping sprees.  [Yes, that's me up there, Ms. Scared of Heights.  But I found that if you don't look over the edge, it's no big deal.  And unlike being in a tall building, I feel like I have a little control when standing on a sudsy roof on a 14-foot high RV with curved edges.] 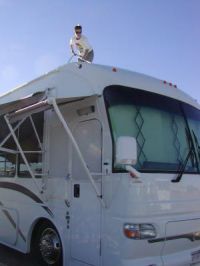 The first week here was pretty much consumed with convention related work, but we did eventually get out and explore Tucson some.  The municipal building downtown has a big prismatic plastic panel on it that changes color depending on the direction you look at it from.  There are also some really nice, multi-colored adobe neighborhoods.  And of course, cactus everywhere! 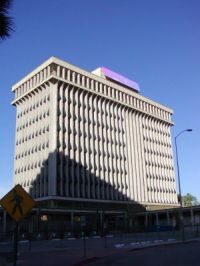 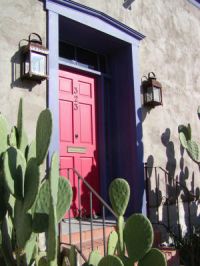 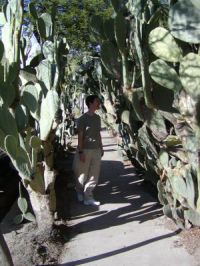 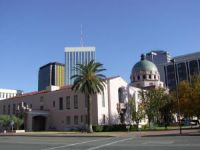 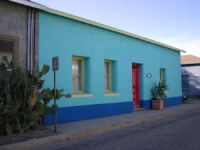 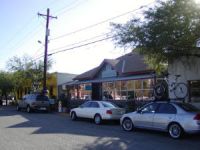 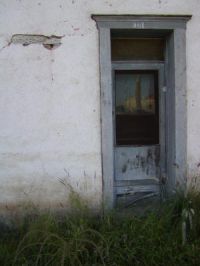 For local flavor, we tried quite a few Mexican restaurants, the best of which was El Charro Cafe, which is famous for their Carne Seca (translation: beef dried in a cage on the roof).  Another special local attraction we took advantage of was the drive-in theater, seeing "Elf" and "School of Rock," which made a near perfect drive-in double feature.  [I take pride in matching the movie to the venue and who's seeing it with me.  For example, I also picked "Legally Blonde" and "Dr. Dolittle 2" for drive-in fare when we were in Aruba--another shrewd programming choice, and saved Gus Van Sant's uplifting "Elephant" for Thanksgiving.  Hmm...on second thought...]

We took a couple of relatively short skating treks too, one morning rolling around the golf courses and baseball stadium in the Randolph Park area, and another afternoon cruising the Rillito Park path along the "river." 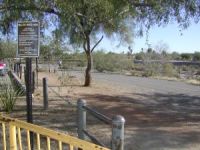 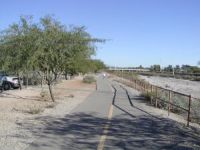 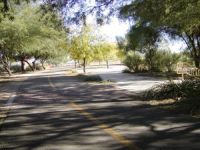 [In closing, a couple of observations about Tucson.  What is it with these old cars?  I saw a PLYMOUTH DUSTER the other day, and more Ramblers than I ever saw back in high school.  Maybe the dry air keeps them from rusting, but doesn't that wreak havoc with the seals?  But these beaters are still on the road here, in droves.

And let's talk about idiotic traffic lights.  The convention here is to have all commercial activity on main streets, which generally have three lanes in each direction and two extra lanes for left turns at major intersections, in both directions.  Makes for WIDE swath of road, and there's no way the left-turners can see around the approaching left-turners.

AND the general rule is for both directions to get protected left turns at the end of the cycle.  Okay, that's understandable, but as you're sitting there hanging out to dry in the middle of an intersection you can't see through, the traffic light in front of you goes red, and I mean FULL RED ~pause~ ~pause~ before you get the green arrow, AND everybody who's back up in the left turn lanes starts pouring left through the intersection when the light is red because they know it's going to turn green.

I think that whole scheme does a disservice to local drivers because they'll go to other cities that don't have this convention and god only knows what will happen.   But then I noticed that not every single intersection in town operates this way, even though there's no signage at these aberrant ones to indicate that you'll not be getting a protected left after your light goes full red.  Admittedly, if you'd been sitting there you would have noticed the protected left at the beginning of the cycle and (I guess) would be expected to infer that you won't be getting another even though you would at practically every other intersection in town, but if you just got there, you simply wouldn't have any reason to know.  This is bad.

And one more thing.  You know how on street signs they'll put the block number off to the right?  Well.  Here, if the sign is one on the big ones hanging over a major intersection (like in the middle), the block number corresponds not to the street whose name is on the sign (and which you are intersecting), but rather the street that you are on.  That's just dumb.  I mean, I can look at the addresses on the street I'm on to see what block I'm in.

But it gets worse, because on regular street signs, like the ones on corners that form an X on top of each other, the block numbers are done the normal way, with the block number and street name matching up on each side of the sign.  Okay, I thought, I guess that's just something else that you learn.  But then I noticed that at a minority of intersections, the big sign over the middle is done the usual way, with the intersecting street's name and that street's block number no it.  Which leaves the hapless driver having to do some serious interpretation when trying to figure out where a certain address is by figuring out which street he's on and whether it's a north-south or east-west, because if he's on a north-south street and the sign has the intersecting street's name and says it's the N 2400 block, he knows he's in the 2400 block of HIS street, and woe to him if he wants to know whether he should be turning left or right to get to the 1200 block of the east-west street.  All while trying to remember whether this is one of the intersections where when the light turns red, everybody in the left turn lane starts flying through the intersection.]