A while back, Road Safety had given me one of their RS-1000 Black Boxes to install in my car so I could get familiar with how their system works.  This particular model is designed to help teenage drivers learn to drive within safe limits by monitoring their speeds, accelerations, and so forth and emits warning tones as they approach or exceed the limits set by their parents.  The sound feedback is a pretty clever idea that keeps the box from being a mere "spy device" that tattles on a driver after they did something wrong, but turns it into an active safety device by alerting them as they start to push too hard so they can back off, and thus develop smooth driving habits. 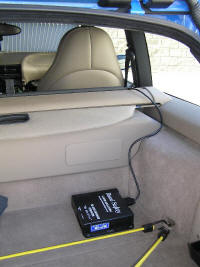 I quickly realized that such a box sounded a lot like the expensive data loggers used by race teams to help optimize their car and driver performances.  It records speed, accelerations, and distance once per second and can produce reports and charts afterwards which, after suitable decoding, provide quite and interesting way to review the driving experience.

Below is a snapshot of my third lap around the full circuit.  I noted the max speed achieved on each straightaway, and the minimum speed dipped to in each corner, and matched up the peaks and valleys with the straights and turns on the track map.  It was then possible to estimate lap times within a second or so by subtracting the time between matching peaks.

It is also possible to find events like the time I missed a shift exiting the Off Ramp turn (hit 5th instead of 3rd gear).  The engine bogged so badly I momentarily thought it had blown, and moved aside and let Nathan and several other cars pass. 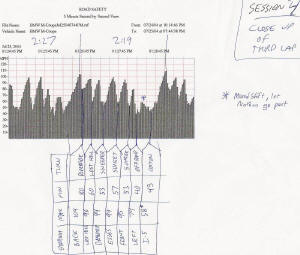 Here's a decoding of the charts above for two laps that permit side-by-side comparison:.

The key places where I gained speed as the day progressed were:

* Onto the long Back Straight, where I picked up 9 mph by getting a faster exit from the Cotton Corners / Grapevine complex, which I eventually got to where I could almost hold full throttle all the way through in third gear, using both inside and outside curbs, which was fun.

* Going over the blind Lost Hill turn, whose apex is at the crest of a hill.  Gained 9 mph by learning to trust where I was going to land.

* Through the Esses, which eventually became comfortably flat out and gave a 6 mph higher peak going into Sunset.

* And peak speed on the Front Straight increased by 5 mph as I learned to enter the Sunset turn a little slower, and be able to get on the throttle earlier going onto the following straight.

The software that comes with the Road Safety black box isn't particularly well suited to race analysis and I certainly couldn't recommend it over a real race data logger for this purpose, but with a little help from a spreadsheet and a pencil, I was able to get some interesting insights out of it.

The lap times aren't quite exact, but here's a table of my best 12 laps:

For the record, I'm running a stock 1999 M-Coupe with the 240 horsepower S52 engine.  Tires are Sumitomo HTR-ZII, which I'm becoming increasingly convinced are some real "sleeper" performance tires.  I was originally tipped to these by another Roadfly denizen, Paul-Huntington Beach.  Gotta love the internet.  They howled steadily just like they did when I autocrossed them to the SPOKES Street Tire class championship in 2002, but actually held up great despite the ambient heat and general abuse of the track.  The peak lateral accel of the day was 1.27g's through the banked Riverside turn, and 1.04g's was pretty typical around the flat Sweeper.

Brakes are stock except for new Performance Friction "Z-Rated" pads and (stock equivalent) Brembo rotors on the rear.  I have a new set of rotors and pads for the front ready to put on, but they weren't quite worn out yet when I did the rears so I'm just carrying them along in the motorhome.  I refreshed the brake fluid with quite ordinary Castrol DOT4 a couple weeks ago.  I was pleased to not experience any brake fade all day with this setup.  My peak decels of the day came on my last lap, at 1.06g and 1.18g's, but I wasn't working the brakes quite as hard on most laps, hitting peaks in the 0.90's.

With almost brand new tires and brakes on the rear, the back end was really wiggly feeling when braking hard for corners, even when just trying to go straight.  Luckily I'm in the habit of heel-and-toe trail-braking this car into pretty much every corner anyway, and was able to keep it balanced by rolling-on a little throttle as needed while braking.  But it certainly wasn't confidence inspiring (downright scary a few times going into the Lost Hill turn even), and would definitely be something to sort out if I wanted to lap this car on a regular basis.

If you like technical car stuff, click the link below and have a closer look at how several laps around Buttonwillow break down:

All in all, I turned about 130 miles on the track, which corresponded burning a little over a full tank of gas.  Despite it being what the head instructor described as "miserably hot," I had a blast and really enjoyed meeting Dan and Nathan.  Maybe we'll meet up again somewhere along the way.