"Of Monkeys, Snakes, and RV Repairmen"

Well, let's just say that as with all aspects of life, in the world of RV repairs, everything is relative.  That would include characterizations of repair facilities as "good" or "not good."  Someone else with an Alfa had used Noah's RV in New Braunfels for some repairs, and recommended them.  I specifically asked the guy if Noah's was the sort of place that would allow Carey to participate in the diagnosis of the problem, and he assured me they would.  That was actually more important to us than someone doing really good work, which is a good thing because that's pretty much how it turned out.

The main problem we had, which added an air of urgency to the repair process, was that the slideout in the living room became balky, eventually to the point that when the slideout motor did show some signs of life, it was necessary to give a gravity assist with some very un-level leveling feet to get the job done: 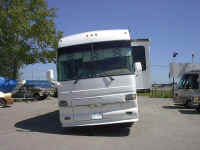 There were some other Alfa-esque problems, like a gigantic area that had been left completely open in what they tout as a "vault-like" basement storage area--the sort of thing that would not have appeared if they sold these things like Sears used to do with houses, in a mail-order kit, for assembly by the purchaser (us).  Or maybe, and I'm going out on a limb here, if they employed people who were competent and cared about what they produced, or failing that, some decent quality control.

Noah's will let you stay in your coach while they work on it, which is nice.  What left a tiny bit to be desired was that the facility is located hard beside scenic Interstate 35, adjacent to the Snake Farm. 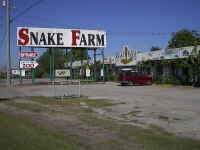 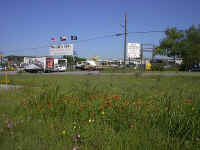 I've driven by that place at least a hundred times and never had the slightest inclination to stop, and then I find myself living next door.  The guy at Noah's said that every once in a while, non-indigenous animals appear in the area, always with the same result:  Someone calls the guy at the Snake Farm and says, "There's a monkey in my tree" and the Snake Farm guy responds, "It's not mine, but I'll come and get it."

It really wasn't all that bad, since snakes aren't too noisy, but the day the wind shifted to blowing from the north across the goat pen, oh, sorry, "petting zoo," I decided we needed to arrange other accommodations; besides, it didn't look like anything was going to be happening to the RV any time soon.  And no, I never did go to the Snake Farm, but we did find a good restaurant in New Braunfels, Huisache Grill.

Carey had be in Austin the next week anyway, so we abandoned the idea of three days being enough to get the RV fixed and left the moho there, and headed to Austin after filling the car to brimming with computers and files and clothes, after leaving my friend Larry a message saying we were coming to stay with him for about a week, and would be arriving in about 45 minutes. 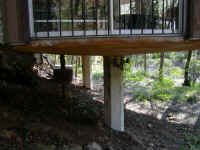 Packing is really hard when you never have to do it any more.  And sure enough, we forgot all sorts of useful things, which really became obvious when I myself took off for an overnighter while we were camped at Larry's house in Austin--Carey hadn't brought his own hairbrush and I'd taken mine, so he "combed" his hair with the little brush that is supposed to be used for cleaning his electric razor.  That Eagle Scout training is really paying off.

I'll skip the gory details of the actual repairs, but just to get a flavor of what getting an RV repaired is like, check out the newest unpaid staff member at Noah's:

Our subject is in the process of assembling the relays that Alfa originally failed to send with the new, bigger slideout motor, which meant that the switch burned up instantly; those are his own assembly notes on his left, the compilation of which was made necessary by Alfa's failure to send any instructions whatsoever, and accomplished by using various instruments and a lot of knowledge I'm completely unfamiliar with.

Carey has claimed that he's as happily childfree as I am, but looking at this uterinesque diagram he made makes me wonder if he isn't plotting behind my back. 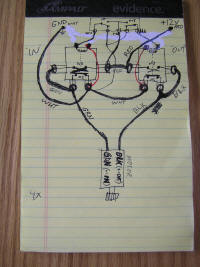 It seems to me that sealing  air leaks in these things would be easier during the manufacturing process, but what do I know? 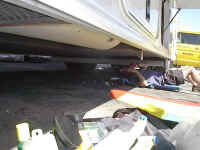 The final result, after four trips to Noah's and a few days work at Digital Vehicles, is that we have a slideout that is moving all by itself--a great improvement--and has a lot more speed than it ever did before.  The sad part is that we noticed other things that might be causing slideout problems, but Alfa made it quite clear that not only are they not interested in paying for any further modifications, they aren't even interested in knowing what Carey thinks is the underlying problem.  You guys know Carey--if he said to you, "Hey, I have an idea," wouldn't you drop everything and say, "PLEASE tell me"? 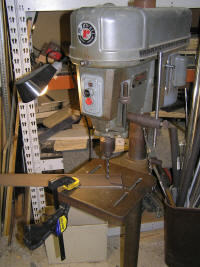 So we ended up going to some steel foundry or whatever that we noticed on the outskirts of Corpus Christi, and Carey bought some chunks of something, which he used to manufacture some parts that are making the slideout work even better.  In a show of wanton childishness, I am refusing to share this fix with my fellow Alfateers on the internet.

Wait, did I just say Corpus Christi?  Please, read on...