The Laguna Shore Village RV park is made up of mostly long-term residents.  In fact, we were the only RV to show up during the two weeks we were there, although we did see one trailer leave at one point.  But that was all the in-and-out action to be had.  A very nice woman named Jennie runs the place--she even remembered how to spell Kriger when I went to re-up for our second week.  Very impressive.

One of our neighbors was this adorable little Scamp.

The owner would sit at that yellow table and do stuff a lot, and he had a wide assortment of power tools for such a small abode.  We watched him work for a couple of days on a long cylindrical object that we finally decided was a flag pole.  He had a bit of trouble getting around and I issued my medical opinion that he'd perhaps had a stroke at some point, and was maybe a Vietnam veteran.  I finally went over to talk to him one day and found out he's 80-something (so much for Vietnam--I would have sworn he was maybe 60), that was indeed a flag pole, and the gold sphere on top was a painted golf ball that was somehow acquiring a patina.

Turns out he had a hankering for a flag pole and by happy coincidence, Red (Jennie's father, whose trailer was right behind us and next to the Scamp; we didn't get his wife's name, so we referred to her as Mrs. Red) was cleaning out some stuff in storage and came across a nice piece of electrical conduit, and the rest is history.

Across the little road from us was this trailer.  I never saw the dog they tied up with that rope, thank heavens. 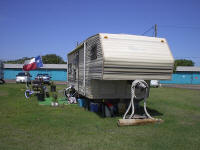 In addition to the weekend storm at Padre Balli Park I mentioned earlier, two other weekends had torrential rain, including record rainfall.  I didn't mind--it keeps the weekend fisherman from going to the launch and leaving behind their trash.  But oh lord, the mosquitoes that get born in that standing water--the size of pigeons, I tell you.  And hungry. 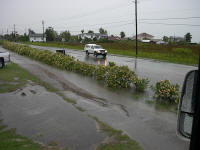 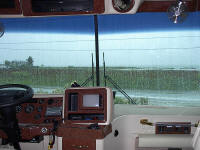 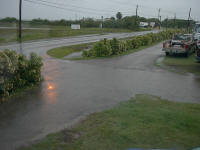 When we first moved over here, we would load up all the gear on the car and drive it the several hundred yards over to the launch, using it as a sort of self-propelled rickshaw.  Carey originally suggested walking it over there and I said no way, that's too much work.  Then after all the rain, we couldn't get over there in the car any more due to the mud.  So we tried launching one day over by Chester's, a couple of blocks up the street, but the edge of the water was nasty, gooey mud and the lagoon weeds stuck like glue if they dried on you (you had to scrape them off with a fingernail).  Finally, we tried just walking our gear over to the regular launch directly from the RV, and figured out a way to get everything across quite easily in two trips each and not even bother with the car.  Carey's always right.

And lastly, so you know that all this windsurfing stuff isn't just a bunch of fun and games, be aware that it involves a lot of mental energy, not the least of which is deciding whether to go at all.  So each morning, the first order of business is to fire up the computer/internet and perform the following ritualistic weather checklist:

Start with the marine forecast.

Check it against conditions over the last 24 hours at Bird Island.

Double-check those conditions against a 24-hour compilation at the nearby Naval Air Station.

Optional:  also check at the airport, which is inland but you can never have too much info.

With good pop-up blocker installed, check Accuweather, which will provides hourly predictions for several days out.

And an aviation site with wind predictions.

Take a look at Intellicast's map, mainly out of habit because it hasn't been particularly accurate for some time now.

Check Brownsville, to see if we should have gone down there like we originally planned.

Finally, look out window, because if it's decent, someone will doubtless have already rigged and started sailing while you were obsessing over all the computerized weather reports: 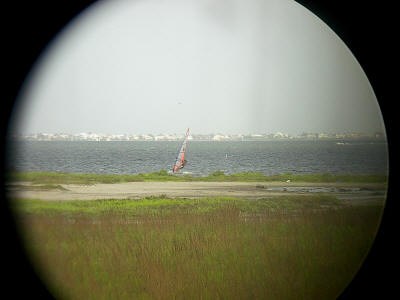 We managed to amass a huge number of shoes in the shoe-removal area.  Those big green things are called Shufflers--you can slide your dirty shoes in them and shuffle around on the carpet.  Carey uses them as lilypads to leap on because his feet splay out sideways and he can't shuffle.  Not pictured are the shoes we wear when sailing--they live outside for reasons that would be clear if you got near them. 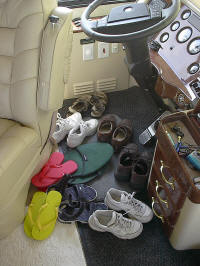 With all this recreating going on, we didn't manage to visit anywhere of note in Corpus; in fact, we went into town only three times in almost a month:  once was by accident because where we were headed was farther in than we thought, once was to go to Target to get a replacement for my beloved Casio watch, and once was for something I don't remember but we ended up at some chain bookstore to read (not buy--hey, they want to turn their places into libraries, I play along) Motorhome and Trailer Life magazines, which I unsubscribed to because of the mountains of junk mail I got from them and whoever they could sell my name to.  Among the attractions we missed are:

Everything else in Corpus (plus Port Aransas)

Wienerschnitzel (I told you we didn't go out)

As I predicted before we started on this great adventure, smoking ordinances would come into play when it comes to dining out.  I eat out a lot mainly because I'm lazy, but cigarette smoke will drive even me into the kitchen.  Pretty much all of California is nonsmoking, and Tucson and the part of Phoenix we were in had good ordinances.  But not Corpus, so we didn't partake of many of the local delicacies, although we managed to have several meals at Taqueria Jalisco, including huevos rancheros with beans, potatoes and tortillas for a whopping $2.75, and they have menudo seven days a week!  And I believe Whataburger IS a local delicacy here.  Oh, and a couple of trips to Snoopy's for fresh seafood under the causeway bridge.  Hmm...maybe we didn't cook all that much after all.

We cut our visit slightly short because although we didn't have to be back in Austin until May 10, we got a hot tip on an RV mechanic in New Braunfels, and we've been making a list of a few problems to get looked at.  We'll let you know how that comes out in our next update.