Another of the unique attractions in Tucson is the Aerospace Maintenance and Regeneration Center (AMARC), which is more commonly called the Boneyard, which the Air Force folks at least pretend to take offense at.  Something like 4000 aircraft are stored out in the dry, clean, desert that is all too easy to come by around here.  A surprising number of planes that end up here get refurbished at some point during their stay and fly again, although it seems that most of those serve as target drones.

We took the hour long bus tour that leaves several times a day from the Pima Air & Space Museum, which if you're ever wanting to see a particular aircraft, they probably have it.   The Air Force base and the Boneyard are bisected by one of the main roads in the south part of Tucson, and it was really surreal driving along that road and being able to glimpse all those thousands of planes just parked out among the cactus off the sides of the road.  [I knew the Boneyard was somewhere near Tucson, but couldn't believe it when we were driving into town the first night, and I looked to the side and saw row upon row of abandoned planes and recognized it as the Boneyard, which I'd seen only in pictures from above--I thought it would be way out in the middle of nowhere.] 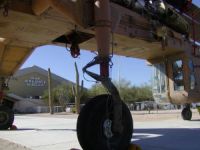 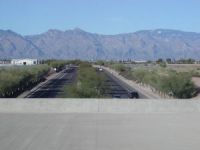 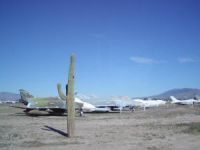 They wrap each plane with a special coating that helps preserve the interior, in case that plane is ever needed either to fly again itself, or be picked over for parts. 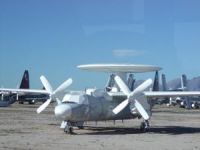 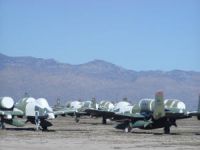 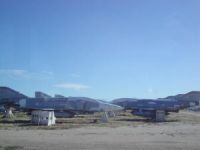 The neat rows of planes against the dramatic mountain backdrop are strangely beautiful.   This was particularly well captured in the film Baraka, which we had seen in spectacular 70mm glory at the Paramount in Austin last year. 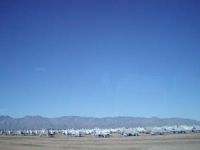 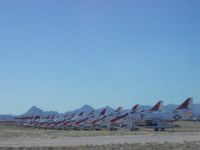 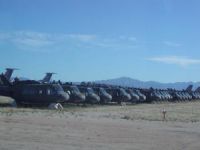 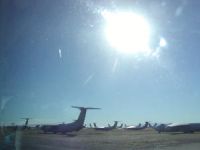 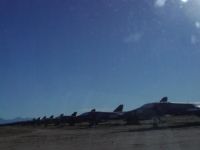 Some planes get their tails and other parts removed and reused, just like an automotive junkyard.   Other planes get simply chopped in half by the giant chopper below, to render them officially "destroyed" as required by various arms reduction treaties. 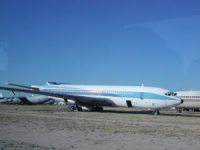 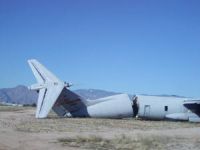 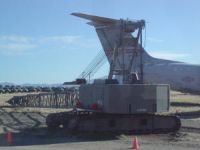