The whole purpose of this trip, other than to finally hit the road, was for Carey to get some work in at Road Safety in Los Angeles.  Actually, Thousand Oaks, which is up and to the left from L.A.  The only reason I'd ever heard of Thousand Oaks was that the Dallas Cowboys had their training camp there forever (before decamping for the more enticing summertime climes of Austin, Wichita Falls, and San Antonio -- gaaack!) but now I see they're heading back to southern California.

Some of you know that I went to college in Los Angeles, but that was a loooong time ago.  I've been back only a couple of times in the intervening years, and never for any extended period of time, so it really was a treat to be back in my old stomping ground.  We stayed for over six weeks and I wasn't all that ready to leave, although I'm sure that knowing I could leave contributed to that sentiment a great deal--it always does.

The nice folks at Road Safety allowed us to dock the moho in a row of parking spaces right outside their door, which made a very convenient commute for Carey.  The commute for me, on the other hand, was pretty grim, but it was probably about time for a new clutch anyway. 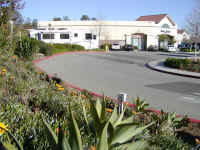 Our "campsite" overlooked the Ventura Freeway (Highway 101), which I enjoyed to an unexpected degree.  It was actually sort of nice idly watching the traffic going to and fro on the freeway.  From my window, that is.  Watching the traffic from within it, which I did all too often, is not so nice.  CNN reported:   "The worst bottleneck in the study is the Ventura Freeway at Interstate 405 in Los Angeles."  That particular exchange is on the sole route between those of us out in the heavily populated hinterlands and Los Angeles proper (which is probably why it's such a bottleneck).

However, the closest real RV park was in Malibu, which sounds great except it's still a very long drive, and the RV park there was surprisingly scruffy.  If somebody was going to be spending hours in traffic, it wasn't going to be the person currently earning some dough.

One day a swarm of big, mean, crazed birds attacked the RV while Carey was inside working.  He said it was actually quite frightening, like being in a real-life version of the famous Hitchcock film.  Otherwise, this was actually quite a nice parking lot to live in, with power available via long extension cords and water available as needed via a series of hoses chained together.  About every two weeks we would move to the other side of the parking lot to dump the tanks into a handy sewer tap. 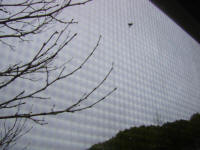 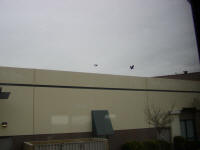 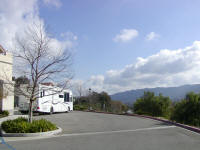 Meanwhile, back to our lead story...Road Safety is developing a teen driving simulator, to be used by driving schools in trying to teach these platform-shoe-wearing hellions how not to commit vehicular manslaughter, and brought in a long procession of teenagers to try out the product.  It's based on Carey's race car simulator and sometimes it was hard to tell whether the teen was driving a family sedan or a Formula One car.  Well, when they were driving on the virtual streets, anyway--when they'd get on the skid pad where you're supposed to thrash the car around out of control to get a feel for it, they'd be all cautious and slow.

So Carey spent 99% of his time perfecting the teen driving simulator... 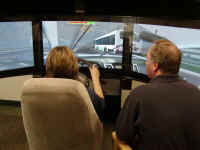 while I was relegated to catting around and finding good places to eat.

Our usual search for local Mexican food hit the jackpot at Somis Cafe.  Somis is a tiny agricultural town north of Camarillo out in Ventura County, but it wasn't far from our Road Safety homebase.  The cafe is attached to the dusty old Somis Market, and it's an order-at-the-window sort of thing.  We liked it so much we went there twice.  Carey got some burrito he can't remember the name of, but recalls that it was made of pork.  I like the carne asada (a/k/a "meat").

Evidently our radar for "authentic" is unerring:  I see that they were closed down for a couple of days in March for "rodent infestation; unsanitary conditions."   I'm not sure if those are two separate offenses, and I can't say I'm exactly surprised at this report.  I'd still go back.

Hey, if you insist on cleanliness, go to In-N-Out (I certainly did), still an excellent choice in regional cuisine and a Southern California classic.

We also twice enjoyed a combination pizza joint/brewpub with the unlikely name of Stuft Pizza.  Oddly enough, their pizzas were of relatively conventional, layered-type construction rather than being stuffed Chicago-style as you might expect from their name.  But the dough is kinda chewy like cookie dough, and their microbrewed beer sampler was tasty and potent enough to ensure a good time.  They had a pizza called the Final Four, which was just four types of cheese on pizza dough--yum.

Carey worked pretty much round-the-clock the first few weeks we were at Road Safety, alternating between monitoring all the teenagers being fed through the simulator and tweaking the software from our motorhome office/bedroom at night and on the weekends when they weren't around.  This was the first "real life" test of the new simulator, and it was a rather busy time.  But we did get a few days to go explore LA together, thanks to the holidays.

We made an epic Christmas Day tour of the region, starting with a rolling feast of dim sum in Monterey Park, which has an enormous Chinese population.  We chose NBC Seafood, which is the  biggest restaurant I have ever seen in my entire life.   I'm serious--this place has got to hold a couple thousand people, and they were all Chinese except Carey and me.  We got there at 10:15 a.m. and had to wait only 15 minutes before about 100 of us were ushered into a newly-opened auxiliary dining room, which was filled with several hundred diners within about 20 minutes.  Those Buddhists really know how to celebrate a Christian holiday.

After stuffing ourselves with tasty little foodstuffs, we left the madhouse that is a popular dim sum restaurant and drove around the stately and Christmas-Day-quiet city of Pasadena for a bit, before heading to the Rialto Theater to see The Triplets of Belleville, which had some scarily high scores on Metacritic.  I picked that theater because I wanted to see such a trippy, visual movie on a big screen, and this one certainly fit the bill.  The theater is badly in need of refurbishing, and the sound system really needs work, but that was okay because the movie has only a tiny bit of dialogue anyway, and what it does have is in French.

One final touch of Christmas spirit was rain, which it hadn't done on Christmas Day in LA in something like 20 years.  It poured and made a general mess of what little traffic there was.  The ONE day that you can count on smooth sailing, and RAIN.  The rain was followed by vicious mudslides, which were around the same time as a couple of earthquakes.  Always something exciting going on for our entertainment. 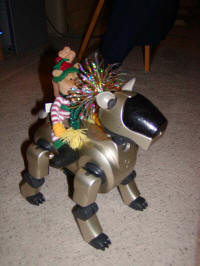 Keeping with the holiday theme, we also had a big time on New Year's Day.  We went over the mountains to Malibu and cruised the Pacific Coast Highway.  The Los Angeles Auto Show was coming up, but who needs it when you have the PCH in Malibu?  Every sort of fancy car you could possibly imagine, fighting it out on the street with everybody else.

From there we headed for Venice Beach for some skating.  But first was some bone-jolting braking by Carey when I said, "Hey, there's a Tommy's."  It wasn't the original (a part of the curriculum for USC students), but it was here.  We questioned the wisdom of eating chiliburgers before skating, but that's about as far as that inquiry went.

So after enjoying another traditional holiday meal, we went to the bike/skate path along the Pacific Ocean, where we'd skated several years ago.  This time, however, the conditions (and frankly, OUR conditions) weren't as ideal because all the rain had pushed sand over big parts of the path, but we persevered.

This is some of the finest skating to be had, outside of New York City.  We explored the northern part of the trail on this visit, from Venice up past Santa Monica.  I still think the part in Manhattan Beach and Hermosa Beach is the most interesting because you're right up against people's houses on one side and the beach on the other.   But it is sort of fun to skate in throngs of pedestrians along the boardwalk in Venice Beach.

Here's Carey unnecessarily doing the move he perfected for squeezing through traffic on the streets of New York (specifically Chinatown--yikes!) on an atypically uncrowded chunk of the bike path at Venice Beach: 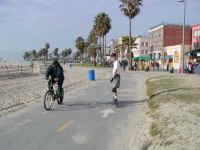 After a few hours of this wheeled nonsense, we walked around the canals in Venice Beach, which neither of us had seen before.  Really nice place, improbably nestled in the epic sprawl that is Los Angeles. 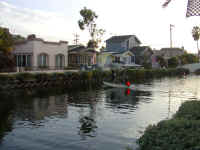 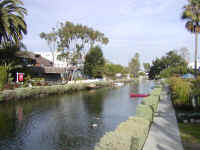 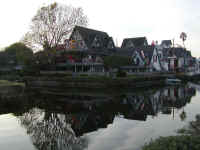 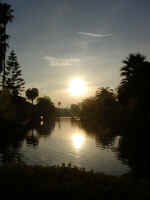