"Taking the Devil's Highway Home for Christmas (How Ironic)"

After spending an extra day in Moab enjoying Arches National Park, we faced several long days to get back to Austin in time for Christmas.  Not far outside of Moab, we came across an arch right by the side of the highway, free for the taking.  Now they tell us!

The enormous windshield on the moho really does allow for some great sightseeing--you can see the windshield wiper in that photo.

Get this:  the weasels who do the highways renumbered famous Highway 666.  People kept stealing the signs, presumably because of its association with the number of the beast business.

This was a seriously big deal.  Check out this treatise on the history of Highway 666 from the U.S. Department of Transportation Federal Highway Administration.  Your tax dollars at work.

The thing is, I'd driven it a few times in the past, and rarely has there ever been a highway more appropriately numbered than Old 666--it's in the middle of nowhere and cuts through an Indian reservation and it was always a white-knuckle experience because it was full of cars held together with baling wire and pipe dreams, all too often driven by drunks.  Whenever one such driver managed to get his hoopty rolling faster than another, he would just take his place in the opposite traffic lane for as long as it took to overtake the slower one, oncoming traffic be damned.  I can't count how many times I've had to slow down and/or finally go onto the shoulder to avoid an oncoming car in my lane.

Based on my experience, it would be better just to get rid of the road entirely rather than renumber it, but nobody asked me.  And now we find that the number we should fear may not be 666 after all, but 616, lending credence to my opinion that the number described the road rather than pre-ordained its nature.  Then again, I will say that this latest trip on the Devil's Highway was less eventful than previous ones.  Maybe it was the number causing the problems after all.

Waiting out the whole controversy is Canada, which still has a Highway 666, in northwestern Alberta.  God bless 'em.

Viewable from Highway "491" is Shiprock, New Mexico's more natural version of the Utah Tree of Life.

This is the traffic at the intersection of "491" and Interstate 40 in Gallup, New Mexico.  I've been through this area a few times in my day, and it's been like this every single time.  It didn't help that this was the day before Christmas Eve and there is a Wal-Mart on the other side of I-40.

We had a brief stop in Albuquerque for Carey to visit a former autocross pal of his who now lives there, Mike Kirkpatrick, and his wife Claire.  Mike still feels the need for speed, evidenced by his latest acquisition, a Subaru STi.  And of course the hat. 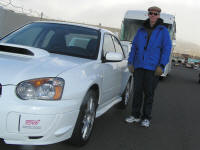 After a comical bunch of unhooking, parking, re-parking, and re-hooking of cars, we eventually managed to get the motorhome parked on a side street and everybody over to the historic Owl Cafe for a good lunch and chat.

We wanted to get down the road a little farther, to Santa Rosa, for our quick overnight stop.  It was getting late, but we figured we could break our don't-arrive-after-dark rule because we'd been to the Santa Rosa Campground before and were familiar with it.  Nice theory, but we didn't take into consideration the snowstorm that greeted us as night fell, and the igloo that the park had become.

The main problem was that we needed water, and the water spigots had frozen, even the ones that were wired with heating elements.  I went to the office three different times for guidance.  They were fixing to close and the woman sort of threw up her hands and said, "It doesn't usually get that cold here."  Well, thanks for the weather report, but that's not getting me any water.  So Carey was running around in the dark looking for a site that we could fit in and that had a working water tap, while I ran back and forth to the office to try to get some help before they got away for the night.

We eventually found a site that looked good and just told the unhelpful people in the office we were taking that one and got parked.  When I went to get our water hose out, it was utterly frozen into its coiled shape.  So I took it inside for a few minutes to warm it up, and by the time I went back out, the water spigot had frozen.  Arrrggghhh.

I got my hair dryer and plugged it into the electric pedestal outside and heated up the spigot enough to get the water flowing.  And I had even thought to take the hose back inside during the process!  I was filling the water tank via the outside opening, which has a little locking door on it sort of like a fuel filler door.  Every time a little water would splash out it would instantly freeze solid onto the side of the RV.  Jiminy crickets, it was cold.

When I had enough water to survive, I unhooked everything, only to find that the key to the water door had frozen in the lock.   Arrrggghhh.  Hair dryer to the rescue once again.

So we have a new rule to go with the don't-arrive-after-dark one:  Never travel with an empty fresh water tank.

When morning came around, it was still really cold (there's a decimal point between the 9 and the 0)...

...but sunshine made everything seem substantially less sinister:

We continued our trip through what turned out to be one of the biggest cold snaps this area had seen in a very long time, to an overnight stop at the Texas RV Park in Big Spring.

Of course, Big Spring derives most of its fame from being home to Cokers Restaurant for decades.   Also, back in its heyday, Big Spring was on a major route from California to Florida before the advent of airplane travel, with a constant stream of celebrities stopping over.  The city also boasted a Webb Air Force Base, a VA hospital, and a mental institution (when we were little, if you acted weird you were threatened with being sent to Big Spring).  Sadly, they closed the air force base in 1977, but turned part of the land into a federal prison (which counts among its alumni David Duke and Billie Sol Estes--and it's not even on Highway 666!).  It was a big blow to the city, but they're trying to keep things going.

We were particularly taken with their Christmas Festival of Lights in Comanche Trail Park (site of the actual big spring), which was right near our RV park and really quite impressive.

Our only beef was that they advertised it as free, but didn't mention the official beggars who would be posted in the middle of the tour.  That's dirty pool.

These giant poinsettias were out in the water.  It's the only time I've seen light displays out on a pond, and photos don't do them justice.

Well, ours don't, anyway.  But look at this guy's--they're fabulous.  Then again, he's a local and was no doubt set up to take quality pictures at night, while we just happened across it with a handheld camera.

Some parts were accessible only on foot.  Of course, in Texas people don't walk anywhere even when it's not really really cold, so we had them to ourselves and could engage in officially prohibited tomfoolery.  (Note that I'm the one who aids and abets and photographs the activity, rather than being the actual miscreant.  My usual m.o.) 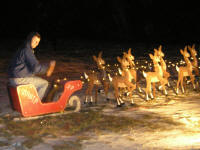 One more tidbit about Big Spring:  Many years ago my friends Dorothy and Boyd were riding with me from Austin to Lubbock.  As we passed through Big Spring, Boyd was looking around and said something like, "I can't imagine why anybody would live in a place like this."  Right about that time, I put on my blinker and he said, "Where are we going?"  I answered, "To my brother's house."  Whoops!

The next day was Christmas, which was spent driving and washing the RV.   The driving part was planned, and the washing part popped up because we saw a high-bay car wash in Burnet.  After driving all those miles in the snow, we were in serious need of at least a rinse.

And this one gave you so much time for your quarter that we did the entire RV and car for way less than $10.  Highly recommended.

That's me up on top, as our home and auto are fed into the gaping maw of the car wash: 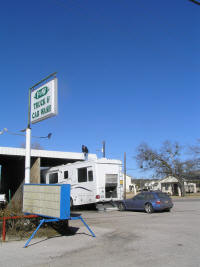 We left remnants of various other states on the ground:

What was surprising was the number of people washing their cars on Christmas Day--there was a steady stream of them and they didn't seem like loners or serial killers or other people you expect to have nothing better to do on Christmas.   Kind of like us, I guess.

But driving on Christmas has the advantage of far less traffic than usual, which made our approach to Austin a real breeze, even on Highway 183 (old timers will remember the "Pray for me, I drive 183" bumper stickers).  And next thing you know, we're ensconced behind Digital Vehicles International World Headquarters once again.

It's funny...when I was little, I loved to watch Top Cat, a cartoon about a cat who lived in a garbage can in an alley.  I always thought it was neat that he was able to get all his stuff in that garbage can and still have room to live.  And here I am, basically living in a can in an alley.  Evidently TV really is a bad influence on impressionable young minds.