Having decided the anticipated storm was never going to hit Reno, and now being on a schedule, we departed for Salt Lake City.  The overnight stop was Wendover, Nevada, on the Utah/Nevada border.  Its biggest drawing card appears to be that it's the closest gambling to Salt Lake City.  If that tells you anything.

We got to the Wendover KOA after dark.  I went to check in, a process that always takes longer than it should, and in this case even longer than the usual long.  The woman at the desk was having trouble working the computer and muttered something along the lines of, "It's been so long since we had anybody check in."  I thought, "Isn't that what Anthony Perkins said to Janet Leigh as he was checking her in to the Bates Motel?"

Fortunately, our stay was far less eventful than Miss Leigh's, and in the light of day we realized we were indeed the only people there.

And did you happen to click on the link our story about the Reno KOA, where we mentioned people lying about the campground?  Well, they're at it again.  We cannot figure out who's writing those things, but it looks like the comments go through some sort of internet translator tool.

Without a bunch of other RVers to bother us, we got an early start across the Bonneville Salt Flats.  Unfortunately, the World of Speed event is in September, and I don't think they have a division for motorhome plus toad.  So we had to drive regular. But we were ready. 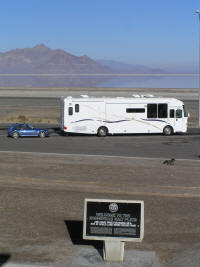 It's pretty barren out there:

People create messages with rocks, which helps break the monotony.

The water is about an inch deep, probably for miles.

Well, THIS is something different: 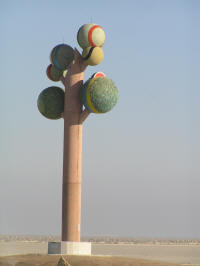 You go past it at highway speed, there's no warning, and even if you could screech to a stop once you realize it's something possibly interesting, there's no parking.  It's the Tree of Utah, an 87-foot high sculpture as close to the middle of nowhere as I can imagine, as evidenced by this view from space.

I was driving on this leg and handled the approach to Salt Lake City.   And pretty admirably, since our exit had one of these new interchanges called a "single point urban interchange," or "SPUI" (pronounced spooey).  They look fairly straightforward on paper, but driving them is an entirely different matter, especially when you're 60 feet long and almost comatose and blind after crossing the salt flats, and turning left means you'll be going through the SPUI with oncoming traffic hurtling toward you on the RIGHT!  The main feature I see that speeds the traffic through these things is that when you exit a freeway, there's no access road to go straight on through the intersection, so a whole section of traffic is eliminated.  And turning left is more like a sweep than a hard left, which means you can go through them really fast.  But with oncoming traffic on the right.  Just keep your eyes on the road in front of you, and there won't be any trouble.

The freeways there were improved for the 2002 Olympics and have a lot of these SPUIs.  But that's Salt Lake for you--they also have this insane street naming system, where the major streets are called things like "West 700 South," which means it's the west half of an east-west street that is 7 blocks south of the center point, Temple Square.  The streets adjacent to Temple Square are called Temple, like South Temple.  In most places, that would mean the southern part of a street named Temple that runs north-south.  Not here.  South Temple runs east-west along the southern edge of Temple Square.  It intersects South Main and South State, which both run north-south and somehow got normal names.

Not only that, if there's a street that's less than one block from the previous one, it gets an interim sort of number, like E 2240 S.  With enough thought, you can figure out where something is, but it makes using a map a migraine-inducing experience.

Then again, you can end up with clever names, like "9th and 9th," where I went to a movie at the Tower Theater and where there was a card and, uh, "novelty" shop next door, where I, as usual, picked up whatever free weekly newspaper was around, and this one turned out to be gay.  So I think 9th and 9th is hip.  It sounds it, anyway.   But be careful--there are possibly four 9th & 9ths, making gay cruising a little sketchy if you're not perfectly triangulated.

In less hip Sandy, Utah, there is Ardell Brown's Quail Run RV Park, on the southern edge of Salt Lake City.  We had to do some maneuvering to avoid hitting the tree when we extended the slide, and to make room for the car. 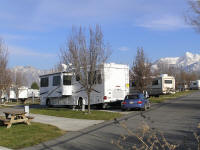 Remember that little mouse problem we developed at the SKP POS in Coarsegold?  Despite our best efforts with traps and peanut butter and artic temperatures and whatnot, he was still riding along with us a month and 1000 miles later.   But not for long, because one of our new neighbors had a cat that Carey thought "looked like a good mouser," and sure enough, the very first night we were there, we hear a loud "MEOW" followed immediately by an even louder slapping sound, like something hit the side of the RV.  We never did quite figure out what that slapping sound was, but we never saw another mouse dropping again.  Here is our hero: 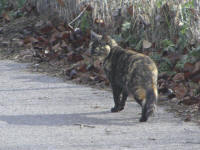 This cat was amazing.  He would stand upright on his back legs for a long time getting himself lined up, and then jump about four feet straight up into the fifth-wheel hitch on his trailer.  That cat had ups! 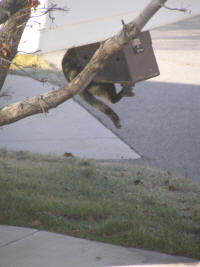 I did some walking around town.  The streets in Salt Lake are extremely wide--132 feet.  Brigham Young decreed that they be wide enough for a team of four oxen and a wagon to make a u-turn (or that they be wide enough for him and all his wives to walk arm-in-arm with no one forced in the gutter, depending on which story you believe).  For whatever reason, they're really wide, even in the outlying areas.  I happened across one that didn't have a stoplight anywhere near where I wanted to cross, but had a bucket with some orange flags in it that you're supposed to carry with you as you brave those 132 feet.  That was just too queer, so I just ran like hell like I always do.  But it's probably a pretty good idea for someone who crosses with less alacrity.

Being the mass transit maven that I am, I actually used Salt Lake's commuter rail line (also built for the 2002 Olympics) a few times because the RV park was only about a mile from one of the stops.  On one inbound trip, I heard two different religious discussions, one of which included people who didn't know each other.  This place is crawling with Mormons, I tell you.

And one inbound trip wasn't matched by an outbound trip because I called from town and talked Carey into picking me up and going to Pie Pizzeria, a write-on-the-walls joint near the university--one of his favorite pizza joints.  Carey talked me into branching out from my usual cheese topping, and I picked sun dried tomatoes and artichoke hearts, which turned out pretty good.  Although I still like just cheese.  So did my mother, and I'll never forget the eureka! moment one night when we were ordering pizza and both admitted with great embarrassment that we like just cheese on it.

In other culinary treasures, Palace Burgers still makes absolutely the best bacon-cheeseburgers in the world (according to Carey--I take my burgers less adorned), mixes utterly delicious banana shakes, and reigns supreme in the fry sauce category.  You think it's just ketchup and mayonnaise until you try the fry sauce at Crown Burgers, a similarly-named knockoff local chain, and realize that what they have is indeed just ketchup and mayonnaise.  Palace Burgers' fry sauce is different.  And much better.  Notably, Palace Burgers charges extra for it, while Crown Burgers has it for free in a dispenser--that should have told us something right there.  You say you've never heard of the stuff?  Get with it--there was even an Olympic pin representing fry sauce.

You may recall that we had come to Salt Lake City at this particular time because Carey had some simulator business to attend to.  He was working with a guy named Fred who lives here, and who had put together a deal to develop a custom driving simulator for the Bingham Canyon copper mine, commonly called Kennecott after the company that runs it.  This is the largest open-pit mine in the world and is one of only two man-made things visible with the naked eye from space, the other being the Great Wall of China. 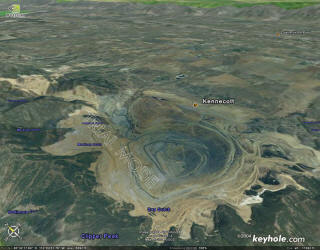 This was a planning trip for Carey to "meet the miners" (as he insists on calling them) and understand how to design a simulator to meet their needs.  In this case, they need a system to teach people the rules of driving around the pit in their little pickup trucks without getting smushed by the enormous (building-sized) dump trucks that carry all the excavated material around in the mine.  We would then go back to Austin for a while, design and build them a machine, and he'd either fly back here or we'd come back in the RV in a few months to install and fine tune the system.  Well, we did eventually return here via RV (in the summer, after a longer than expected delay in getting the deal finalized) and did the "tourist version" of the mine then, so we'll cover that experience in a later update.  Pretty impressive stuff though.

Carey also managed to go skiing a couple of times, including one nighttime outing to Brighton with Fred and his ski-patroller wife Sarah, and another more conventional day at his favorite area anywhere, Alta.  Check out the slide show below for his ski pics and comments about his adventures (or misadventures, from the looks of it). 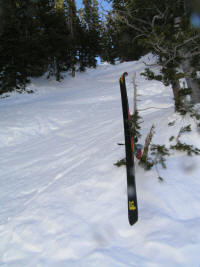