In addition to becoming a bit bored with I-10, one big reason we decided to take the slightly longer I-40 route this time was that Carey had never been to the meteor crater in Arizona.  I'd been there 10 years ago and assured him that it was indeed a big hole in the ground, the likes of which he wasn't likely to see anywhere else.  Another unsolicited recommendation had come from his neurobiologist friend Diek, whose dad is an astrophysicist keen on all the cool stuff whizzing through space and slamming into each other, so who could resist that?

It sounds like a tourist trap sort of thing, but it's really quite amazing.  And they even have a fancy new visitor center now to help explain how this big hole got here, with interactive exhibits and a big screen movie. 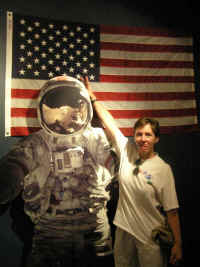 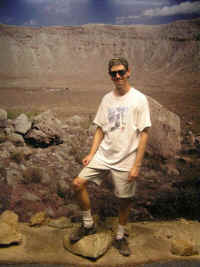 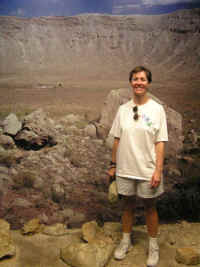 I'm not usually the kind to ask a bunch of questions on tours, but there was some shiny stuff down at the bottom of the crater and I couldn't figure out what it was.  So I did ask, and it turns out it's the wreckage of a private plane a couple of commercial pilots rented to check out the crater up close.  It seems they simply got a little too cocky and misjudged the winds that swirl strangely through this thing and got slammed into the rock.  Now that's some useful information.  I guarantee that nobody remembers which geologic periods the various layers of rock came from, but they're all going to remember that a couple of idiots crashed a plane joyriding inside the crater!

NASA used to train astronauts down in the bottom of the crater, and they left one behind for the tourists to look at through a nifty little telescope.  Since this thing is so vast, it's helpful to have a reference point down there.

After spending the morning touring the crater, we repaired to the RV in the Meteor Crater parking lot, Subway sandwiches in tow, for a little lunch and some air conditioning and college baseball courtesy of the onboard generator.

Once the game was over (sooner than I expected, because I still didn't have the time thing figured out), we mused that we could make it all the way to the other side of Los Angeles by midnight if we drove straight through.  What had initially started as a joke quickly became reality, as we realized that we'd be able to skip the worst of what would normally be about 2 hours of dense L.A. traffic by arriving in the middle of the night.  So we just cruised on across, and we were set up in the Road Safety parking lot a little after midnight, and ready to go to work the next morning.