"What if a Tree Falls in a Petrified Forest?"

Another day on the road landed us in Holbrook, Arizona, our home while exploring this chunk of Arizona.  The campground was called the AOK RV Park -- a delightfully diabolical twist on the rival KOA across the street.

Because we had our own accommodations, we didn't stay at the Wigwam Motel, which would have been a whole lot of fun.

Holbrook is where all hell broke loose with respect to time.  I was trying to catch baseball games on TV, and watching anything on satellite TV is a little sketchy when it comes to what time it's on, especially if you travel around and don't stay in one time zone.  We get two network feeds (New York and Los Angeles), which are three hours apart and I can usually figure something out between the two of them.  But the games were on channels like ESPN, which are broadcast only once on satellite, and you can't necessarily trust what time it's purported to be on locally.  And I remembered that there is something  funky when it comes to Arizona and daylight savings time, so I was trying to take that into account.  I concluded that we were either still actually in Texas time (where we'd come from) or already in California time (where we were headed)--I can't remember which-- and set a bunch of clocks accordingly and created a huge mess because I had it exactly wrong.   PLUS, the damn sun comes up at like 4:00 a.m. there, which is enough to make anyone mistrust a clock.

Redemption came in the knowledge that I'm not the ONLY one who's confused, since somebody evidently got tired of telling everybody what time it was.

Our tour of the area started at some unspecified hour, at Petrified Forest National Park and the Painted Desert, which are connected in one park.  We just sort of showed up and started looking around, and quickly realized that neither of us had any firm idea about what petrified wood actually is, like what it's made of.  We burned quite a few brain cells putting together clues from various signs and brief explanations throughout the park.  Turns out, we were pretty much right, if the laminated sheet I found posted on the inside of the door of a stall in the women's bathroom is to be believed.  If only I'd needed to use the facilities before our trek through the park.

We covered the entire park, making a point to take every trail and hike they had.  Basically, the place is strewn with different sizes and shapes of what looks remarkably like wood, but is actually trees which were transformed into solid rock through an unlikely series of events eons ago.

Everybody was on full alert for new specimens to examine: 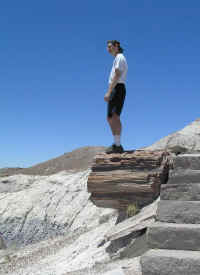 Here are a few photos of some of the various logs and formations there, some giant and some tiny. 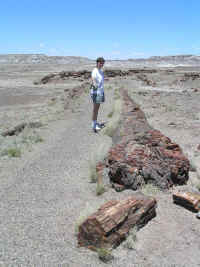 More photos, from a different section of the park: 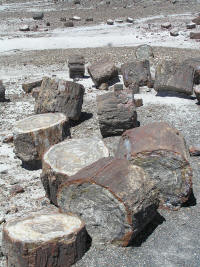 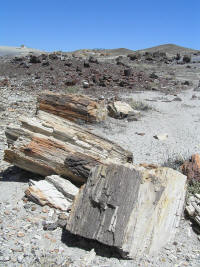 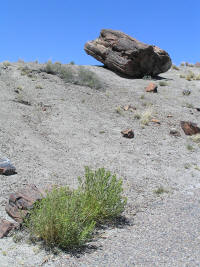 It was cool how the rock trees took on various colors and really looked like different types of wood.  Carey also thought the chunks looked an awful lot like sausages.