"Ferocious Beasts and Plants of the Arizona-Sonora Desert Museum"

We kept reading raves about how great the Arizona-Sonora Desert Museum was, but never could get a handle on exactly what they have out there.  We'd been living about a mile from there for a week, so we were pretty familiar with that chunk of desert itself, and I'm not a really big fan of caged live animals or stuffed dead ones.  And as for comments on the internet, they'd invariably just say, "We love the Desert Museum" or "The Desert Museum is really great."

Well, that doesn't tell me much.  Case in point:  an experience I had at the Riverside movie theaters in Austin about 10 years ago.  They showed midnight movies on Saturday nights, and those who know me realize that's not exactly my scene.   However, sometimes one of the screens would be rented by a saint from Dallas named Steve Carlton, and they'd show a Hong Kong movie at midnight on Saturday.  For that I would drag myself down there.

So I'm standing there one night, and a guy in his early 20's and his date are in line in front of me, picking which mainstream movie to see.  The guy seeks the advice of the girl selling tickets:

Tragically, I was by myself and had no one to share eye-rolling with.  I mean, what real good did this "recommendation" do?  Maybe she liked it because her cousin's brother in law was the gaffer.  Or maybe she's partial to sensitive portrayals of cannibalism.  Who knows?  And that's the point--"it's good" just doesn't cut it for me.

But then two of my brothers said they liked the Desert Museum (with nothing more, of course), and I realized that resistance was futile and suggested we pay the place a visit.

Guess what.  It's great.  And here's WHY it's great.  First and foremost, we were there when it wasn't 150 degrees outside.  That always helps.   But it's also particularly well done.  Signage is informational and, more important, funny.  Here's the sign in the javelina display, and there were several others that made me chuckle--that doesn't happen often in most museums. 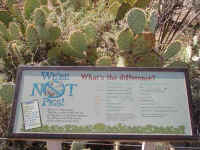 They had a session where they let some hawks do some free flight stuff--this is the lady's hand the hawk is on.

You could stand right by them, and those things would swoop right over your head.   If I'd had a beehive hairdo, I would have been nervous about their claws catching in it.

They also had some cute furry animals.  I went strolling around some rocks once, and came across this--scared me half to death, even after I realized he was behind a window. 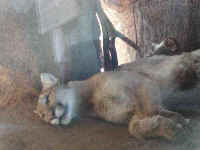 He was sleeping, and his eyes were rolled up in his head and he was twitching like he was dreaming about chasing rabbits.  Those paws are enormous.

The bighorn sheep were a riot. 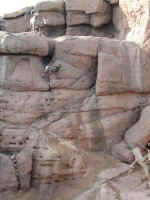 They'd go straight up and down this wall.  The little one miscalculated once and fell but just kept running all the way up the other side, like he meant to do it.

They had some of our feathered friends, too, including this adorable one whose head would swivel all the way around. 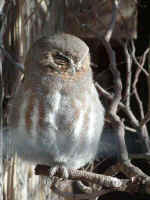 He and some others were kept in sort of a skanky enclosure, and the staff had a sign on it admitting that it wasn't really great, and they were trying to raise money for a new one.  I really like their style.

They also had some beavers and otters in ponds where you could watch them from up above or from below the water level, and birds, and butterflies, and of course plenty of cactus: 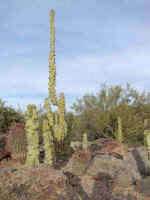 Not all was cupcakes and roses, however.  They had a big display of snakes.   They were all behind glass and absolutely not bothering anybody, but I just couldn't take it.  As we were making a hasty exit (hey, at least I went in there), I admitted that if called upon, I could throw up at that very instant.  Pretty shameful behavior, but I just can't help it.

But all in all, a delightful experience, and I'm glad I took everyone's advice and made time for it.  Even if you've seen your fill of desert, heard plenty of coyotes screaming, and aren't really in the mood for a "museum," consider a visit anyway.  Quality work trumps everything, every time.

To open a new window and see our full photo gallery (snake-free!) of the Arizona-Sonora Desert Museum, click this link.