"Back to Nature at Gilbert Ray Campground"

After a couple of weeks wallowing in creature comforts at Voyager, we were ready for a change of scenery, and found just the spot out west of Tucson near Saguaro National Park.  The Gilbert Ray campground in Tucson Mountain Park is a wonderfully isolated place in the middle of a huge patch of giant cactus.  We ended up in a spot that has fantastic views in all directions. 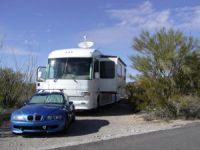 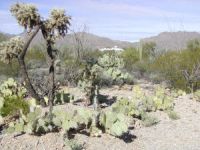 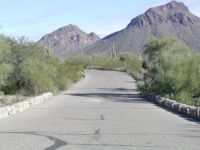 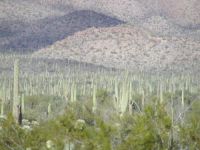 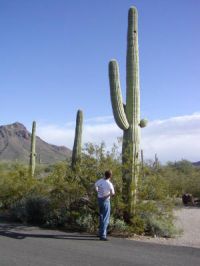 Out my "office" window I have a natural garden of smallish cacti with a rugged peak behind, and out the living room windows we look out over a vast valley, which has featured some of the most dramatic sunsets imaginable. 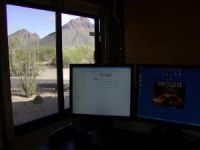 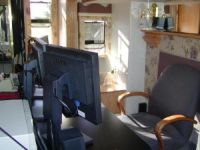 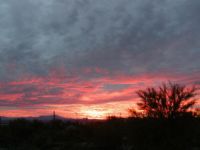 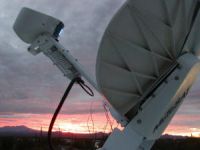 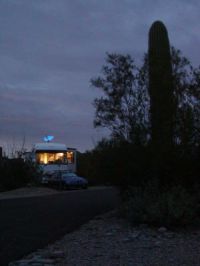 There are quite a few trails leading off through the desert, including one to the semi-famous western movie set turned theme park known as Old Tucson.  Debbie also went for a mountain bike ride one afternoon while I sat in front of the computer working.  [Note to self: If you haven't ridden a bike seriously off road in five years, don't make your first foray on an 18" wide path with cactus on both sides, broken up only by rock-strewn washes with steep banks, on a trail headed straight up a mountain.  Instead, try a walking path like the one pictured, which takes campground denizens over to Old Tucson.] 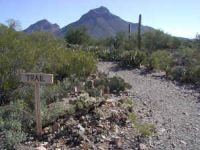 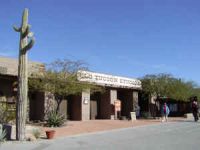 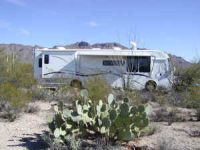 For Thanksgiving, we took the car and went for a drive out Northwest of town, passing Biosphere 2 (which was closed for the day, and come December 22, will closed indefinitely as Columbia University's contract runs out).   Upon returning to town, we spotted a side street labeled "Roller Coaster Road," which I naturally had to try out.  Aptly named, this route actually provided the coveted "air time" sensation, only in an automobile instead of a coaster.  And that was driving it at approximately the speed limit... would be a really wild ride if driven more quickly.

[We didn't know where Roller Coaster Road would take us, but it dumped us out on a street that I recognized, and I imagined a way to cut through back Oracle Road, the main drag.  We got behind a car with four older people in it; it was about 4:00 Thanksgiving afternoon, and I said, "I bet they're going to Furr's for Thanksgiving dinner," and sure enough, in about a mile they turned into a parking lot before getting to Oracle and there is was--Furr's.  That's when I knew that I had spent enough time in Tucson and could safely move on.]

The next day, inspired by uncharacteristic 15-25 mph winds, we couldn't help but pine for some kind of lake to windsurf on.  According to the maps, there is nothing like that around here, but from the National Park visitor center, we thought we could see three large, rectangular lakes down in the valley.  We assumed they were actually mirages, but decided to ask the park ranger anyway, and sure enough, he informed us that they were a new experimental project related to the aqueduct system that comes off the Colorado River and provides water to much of Arizona.  Tucson is the end of the canal, and they decided to build up some reclamation pools to theoretically let the water soak back into the underwater groundwater system.  So that was all fairly interesting, but unfortunately when we drove over to check them out, they were surrounded by razor wire fences.  Seemed like they would have made nice little  artificial windsurfing lakes in the desert otherwise.

Sunday morning we decided to hike the trail up nearby Brown Mountain, which we'd heard featured a 360 degree view from the top (imagine that!).   The upper part of this trail is what Debbie had accidentally turned onto during her bike ride the other day, and I can definitely see why the hikers she encountered coming down treated her like she was crazy for trying to ride up it. 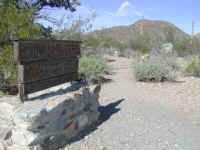 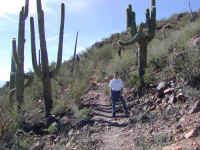 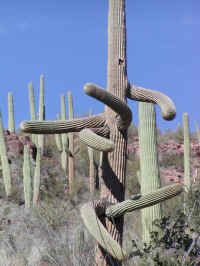 From the top, we got a good view of the three infamous "rectangular lakes" that I think would be so great for windsurfing on, if not for the razor wire.  Click on the image below to judge for yourself: 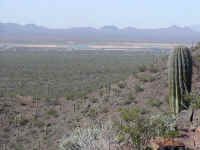 We can stay in this campground for one more day before hitting the 7-day limit, and after that, we're planning to head up to Phoenix for a few days, and then on to California for a longer stay.