We arose again nearly at dawn, although not exactly by choice.  "Knock, knock!"  Barely awake, we figured it must be someone else's door and tried to ignore it.  Surely even the notorious See Ya wouldn't inspire somebody to come ask for tour at this hour.  Would it?

But the racket soon came again, so I got up to investigate.  By the time I made it to the front, there was nobody out there, but it was obvious why there had been.  An enormous puddle of what I feared was black water was flowing down the hillside and right through several campsites below us! 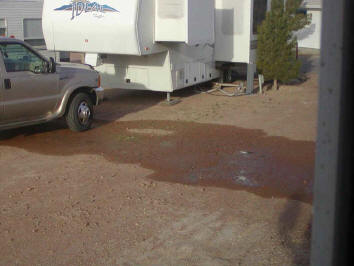 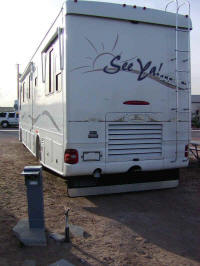 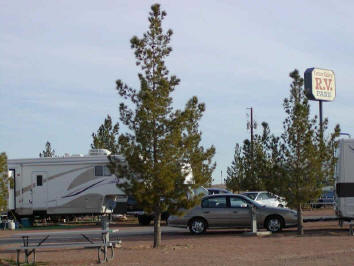 Remember how the night before, we were trying to be considerate and repositioned the coach to leave more space for our neighbors?  Well, after moving forward, our sewer hose wouldn't reach the connection, so we had decided to just leave it on the ground under the coach with the valves closed, and we'd back up in the morning and dump before departing.  So naturally, when I saw the big puddle, I figured that somehow both the electric and the manual valve must have failed and either black or gray water had gotten loose!

But once I got outside, the sewer hose proved to be dry, much to my relief.  Looking underneath the coach, I quickly found the source of the leak -- a small winterization drain valve for the water heater had somehow worked its way open just a tad, and apparently over the last 10 hours had dripped enough fresh water to make one heck of a puddle on the hard dirt.  So I closed that tightly, and reported back to Debbie inside that we hadn't sprayed sewage all over the park after all.

This was all harmless though still rather embarrassing, so we both agreed to just pack up quickly and get rolling toward home ASAP, which worked out great in the end anyway.   We just cruised easily along I-10 all day, making one final stop for fuel around Junction, TX.  As you can see below, the See Ya excels at removing flying insects from the highway ecosystem.  What a mess. 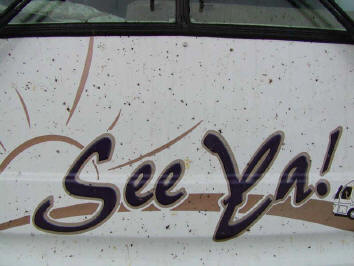 We refueled three times during the trip at prices ranging from $1.75 to $1.99 per gallon.  We mused that naturally, the price of diesel fuel would spike to record highs right when we decide to buy a giant motorhome... 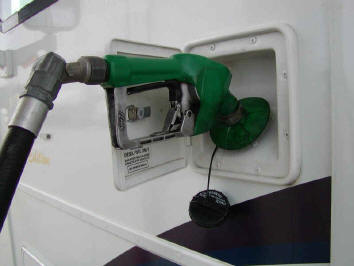 Our mileage varied from 8.12 to 8.30 mpg which I thought was quite good considering how we had thundered up all the mountains at full-throttle and cruised on the open Interstates around 75 mph.  With a 100-gallon tank, just one fillup can approach $200, which presents a Pay-at-the-Pump problem because the pumps tend to shut off at either $50 or $75 per purchase, so you have to keep starting the process over. 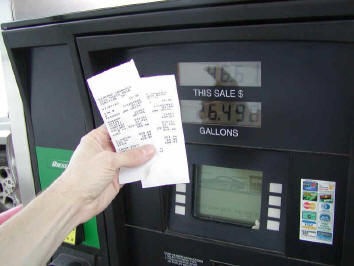 At the "real" truck stop we used in Oregon, this was not an issue because they didn't have Pay-at-the-Pump -- you had to pay inside, and as we later found, civilians who didn't have a "Fuel Permit" did not get the advertised price of $1.75 but had to pay $1.99 per gallon.  Bummer.

Anyway, we rolled into Austin a little after 5:00 p.m. and decided to stop by Larry's house and let Debbie pick up her car.  This seemingly innocent notion led to a minor crisis, as after exiting MoPac and needing to cross back underneath on Enfield, we encountered a threatening sign reading "13 ft-4 in."  With highway overpasses like the one below, this had not been a concern. 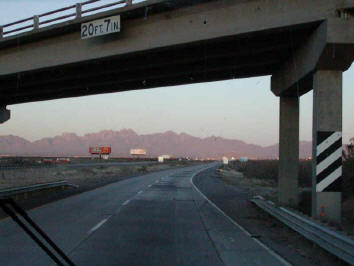 But I had read somewhere that our height was 13 feet and 1 inch, so this urban overpass was gonna be really close.

So I came to an abrupt halt in the middle of the street, undoubtedly much to the annoyance of the regular little vehicles sharing the road, and pondered.  Soon enough, an idea hit me, and I threw the switch to dump the air from our air suspension.  Pssssssshhhhhhhhhheeeeewww.  Slowly, we started to drop.  I wasn't sure exactly how far that would take us (later measured at 3"), but I figured that every inch counted.  After a few moments, I let off the brake and we slowly crept under the overpass, all the while praying we didn't hear any crunches.

"Woo hoo!"   We made it.  With that little obstacle overcome, Debbie retrieved her car, and we communicated via walkie-talkie while making the drive across town.  It was nice to have a "spotter" out there helping to clear the way, especially when it came time to back it into the parking lot behind Digital Vehicles.  This thing is so big that there's just no avoiding clogging up multiple lanes every now and then, so I just paused in the middle of Metric Blvd, waited until everybody settled down, then threw it into reverse and guided it in using the rearview mirrors and backup camera.  Just gotta think like an 18-wheeler and assume those 4-wheelers will get out of the way.

After we got the rig parked and put to bed, Debbie offered me the keys to her Subaru wagon and said "Here, you drive."  I wasn't sure why, but I took 'em and off we went.  After 5 days of driving a couch about 10 feet off the ground, it was absolutely wild to drive a regular car again.  It really felt like our behinds were dragging on the pavement and that we were going to be squashed like a bug by every Suburban or Excretion that passed by.