We woke up bright and early and enjoyed a quick shower and warm oatmeal.  I snapped a nice photo of the Alfa at the rest area in the wonderful, golden morning light. 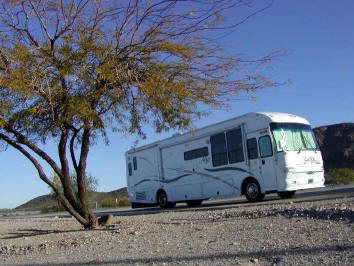 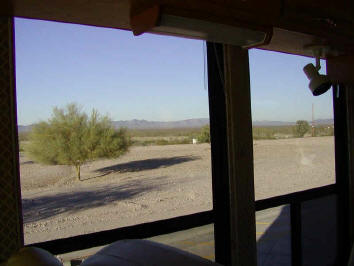 We were now driving directly into the sun, and the triple, power-retractable sunshades over the windshield proved to be very effective.  By now we were really getting the hang of things, and the wide open interstates across this part of the country were what this vehicle was made to cruise.  Rik had commented that it was "like driving a couch" on such highways, and we now got to experience firsthand what he was talking about. 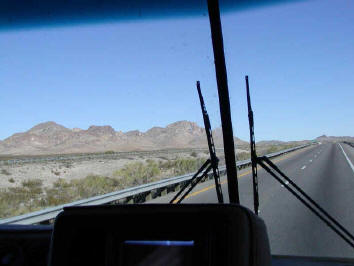 The special seats Rik installed are supremely comfortable, and the big See Ya tracks straight with one finger on the wheel, and cruises effortlessly for hours at 75 mph under these conditions. 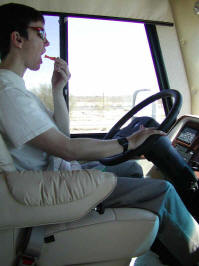 I enjoyed a nice nap in the co-pilot's seat, which reminded me a lot of Delta's Business Elite seats I enjoyed a couple of times across the Atlantic before they gutted their frequent flyer program and eliminated such upgrades: 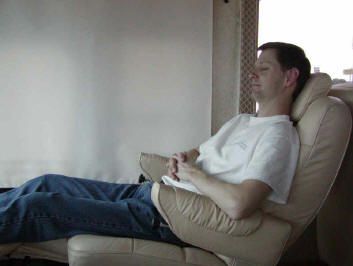 We stopped off at a Pizza Hut near Tucson, and enjoyed watching what appeared to be a little-league baseball team eat and frolic in an adjoining glassed-in room.  Debbie likened it to watching an ant farm.  Blissfully silent but frenzied activity.

Hours later, the sun lined up directly behind us and we cast a loooooooooooong shadow on the road: 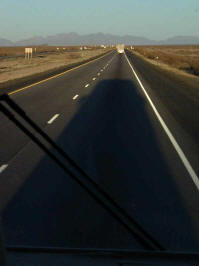 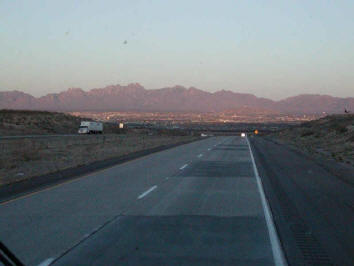 We eventually settled after another 550 mile day, just beyond El Paso in a rather unassuming RV park in Clint, TX, that had a 7-Eleven store as its headquarters--Cotton Valley RV Park.  Once again we set up in the dark, and ended up repositioning the coach after the first attempt was going to have our main slideout end up too close to our neighbor's front steps.  I also got to try out our medusa-like 50/30/15 amp adapter box, which at least sort-of worked, and I didn't even have to call the guy in Florida who made it.  For times like these when we don't really need 50 amp service, it would be simpler to have just a regular "30/50 dogbone," so that's now on the big shopping list.

Before going to bed, I decided to play with the living room furniture.  My long-term plan is to install a 42-inch plasma TV and convert the standard TV locations to storage.  Using a dinette cushion as a stand-in for the plasma TV, here's a rough view of how this might look: 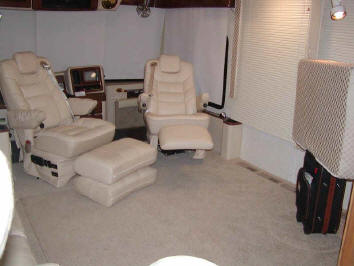 The driving seats rotate and lay back and become quasi-recliners, so in conjunction with the couch we have plenty of seating and can live without the two factory-supplied recliners that are normally jammed into that space.