Story by Carey, Photos by Debbie

One day in late June, I casually mentioned that I'd read on my favorite M-Coupe message board that some Southern California owners were getting together for a track outing in July.  Next thing I knew, Debbie had said "Happy Birthday!" and I was signed up.  Thanks, Debbie!

I'm still working on "simulator stuff" in Thousand Oaks, so we decided to leave the motorhome at Road Safety's headquarters where we're comfortably ensconced, and just take an overnight car trip instead.  Kinda novel, having to pack to go somewhere...

The track is about 150 miles away, and inland, near Bakersfield.  We took the "scenic route" Saturday afternoon, stopping in Ventura at Casa De Soria for tasty Mexican food, then enjoying the wonderfully twisty two-lane Highway 33 through the mountains outside Ojai.

After an uneventful stay at the Motel 6 in the Interstate stand-in for Buttonwillow, the town, we headed a few miles up I-5 to Buttonwillow, the raceway, arriving at 8:00 a.m. to get signed in and situated.  The overall scene was very relaxed, highlighted by the tech inspector bellowing "GET OUT OF THE CAR" like a cop when I pulled into position.  Turns out, he apparently is a cop in real life, and that's his signature line -- quite hilarious, really. 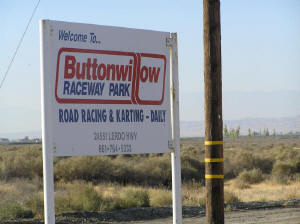 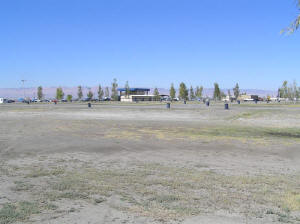 One of the first things we noticed was an Alfa See Ya Gold in the track's RV park.  This turned out to apparently be Alfa owner Johnnie Crean's own coach, which was there for an event the day before.  Characteristically, it had its hood open and a guy was adding coolant, one cup at a time, into that inaccessible filler...ha!  It did have a matching trailer behind it that looked very nice though. 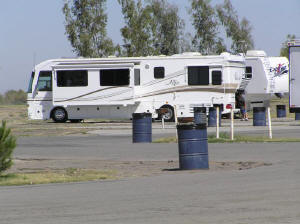 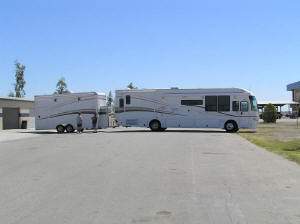 As expected, since I hadn't been to Buttonwillow before, the powers-that-be insisted that I start out in the beginner group even through I have quite a bit of experience driving on racetracks, autocrossing, designing racing simulators, and so forth.

The full track is 2.7 miles around and has a surprising amount of elevation change that makes it really fun to drive.  In the morning sessions, the beginners used the East Loop and the advanced group used the West Loop, driving simultaneously.  In the afternoon, the groups alternated sessions on the full circuit, which today they were running clockwise, and using the Lost Hill and Sweeper options (configuration #16).  Their layout offers a lot of variations!

After one session on the East Loop with an instructor along and a bit of persuading, they decided I was "okay" and let me move over to the advanced group, where I finally joined my 'Coupe brothers from the Roadfly message board.

From left to right below, we are: ckriger, NathanLA, and PbFut  (a.k.a. Carey, Nathan, and Dan). 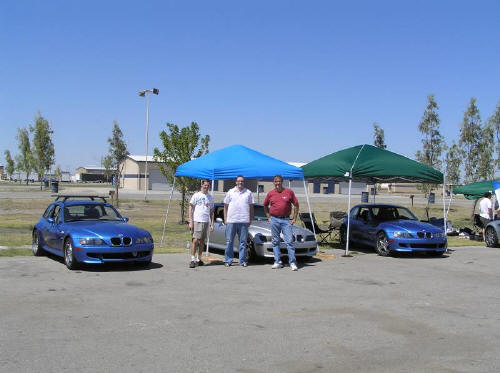 I ended up changing parking spots 3 times during the day, and Debbie was almost run ragged hauling our pile of luggage from place to place in the 100-plus degree heat.  Much appreciated though, thanks Debbie!

Right after I got the go-ahead to change groups, the advanced group was heading out for a walkthrough of the West Course, which was timely because I had missed the warm-up sessions on the West side, and would have been somewhat lost otherwise.  This was remarkably like an autocross walkthrough, which I'm plenty familiar with, so I at least got the track mapped out in my head a little better. 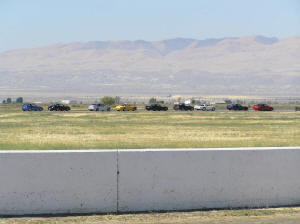 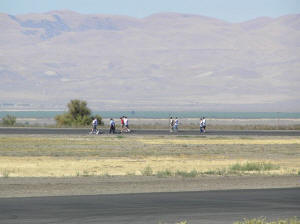 Finally around 10:45 a.m., with a Road Safety black box equipped ambulance standing by (they're everywhere, once you realize they exist), I hit the track for the first of two morning sessions on the West Loop.  Those first laps were pretty exciting, I must say -- being just thrown out there with no warm-up and having to learn the track while trying not to get run over by all the people who already knew it.  Lucky for me, I happened to end up behind Nathan, who is plenty quick and drives a nice clean line, which really helped me learn the track quickly. 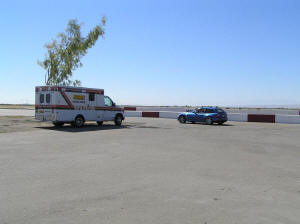 Debbie took some photos of our various shoe-shaped cars running around the track.  Of the blue ones, mine is the one with the roof rack, while Dan's has the little rear spoiler.  Nathan's is silver.  It was especially cool to run close together with some other M-Coupes. 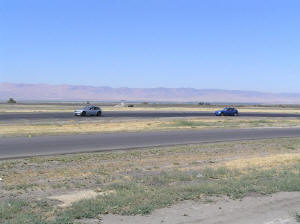 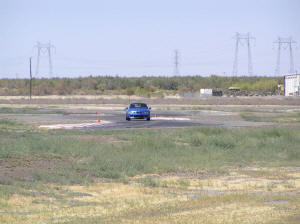 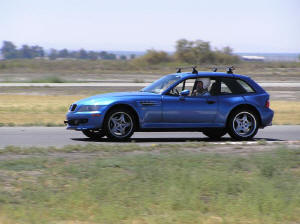 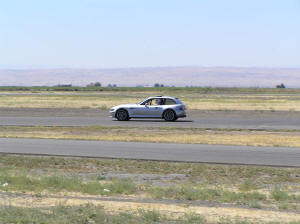 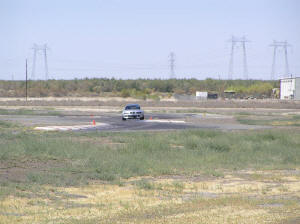 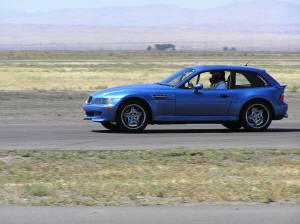 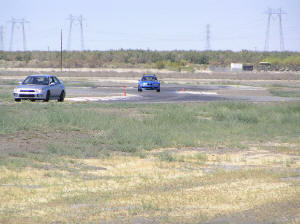 While standing next to the car after the second morning session getting ready to go to lunch, my left-rear tire suddenly went BOOM then let loose with a loud hisssssss and proceeded to go flat right in front of our eyes.  One of the oddest things I've seen, really.  The combination of 100 degree air temperatures with elevated tire pressures (42 psi cold, which had risen to around 47 psi hot) and high internal temperatures from driving hard had apparently softened up the rubber valve stem enough that it had swollen up like a balloon and split open.  I considered myself very lucky that this happened in the pits instead of on the track!

I was glad to realize that the tire itself was okay, but I still needed a new stem, which meant I had to get the wheel off and take it somewhere to be fixed.  Luckily, the guy next to us had a jack I could borrow, and Nathan had a torque-wrench and some nifty wooden blocks I could drive onto and raise the car enough to get the jack under.  Buttonwillow normally has a tire shop right on the premises, but it wasn't open this particular day, so Dan volunteered to run me into town 11 miles away, where we were told Castro Tire could probably handle this.  Say "hi" to Fidel, they said.

Sure enough, once we found Castro Tire, the friendly fellow there jumped right on the task and had a new stem installed in less time than it took Dan to fill up with gas.  So less than 45 minutes after it went flat, I was back at the track and had the tire back on.  There were even a few minutes left to wolf wolf down a little BBQ, which Debbie had thoughtfully gotten a to-go container full of for Dan and me to share (and served ably as pit girl, holding the umbrella over me as I worked on the tire).  Thanks again to Dan, Nathan, and Debbie for all their help during the big tire crisis!

After that frenzied lunch break, we hit the full circuit, first with an instructor driving each of us around for a couple of laps, then we were on our own for four more sessions.  While I was driving, Debbie explored the grounds, and took a few shots from the balcony of the main building that overlooked the track.  She was particularly fond of the yellow Mini Cooper: 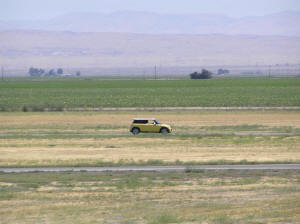 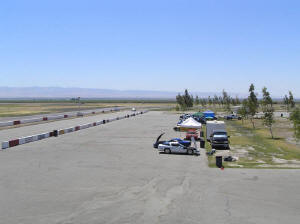 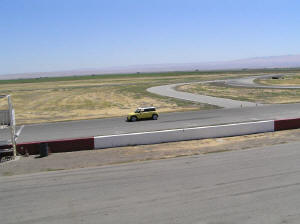 Click "next" below to read on, about driving the full circuit in the afternoon...