"Into Hot Air: The Velocity Games and More"

We had to get the RV from Austin back down to New Braunfels for that third attempt at fixing it, and decided to use that 50 miles toward another week of windsurfing in Corpus.  We went back to Laguna Shore Village, this time staying in the space next to the one we had last time, because this one had a 50 amp electrical hookup and we could run both air conditioners.  One of the wisest moves of my short life.

It is so ungodly hot in Corpus in May that it literally takes your breath away.  It's the only place I've ever been that is even hotter early in the morning than in the afternoon.  One morning, the temperature was in the 80s but the heat index was something like 108 degrees.  We came back to the RV one day and condensation had formed all over the outside walls, something I'd certainly never seen before.  What cools things down in the afternoon is the refreshing gulf breeze, which might be more accurately described as gale force winds blowing over miles of 90 degree salt water before commingling with the humidity on the land, but it sure beats what goes on in the morning.

I thought we had it bad because the air conditioner in Carey's car isn't working.  But there are people living in that RV park with no air conditioner in their trailer, and combining that with a long holiday weekend means just one thing: excitement.  As expected, Corpus rose to this Memorial Day challenge.

Late Sunday night, Carey said he heard something.  I didn't pay much attention because he's the one who once couldn't get to sleep because of some terrible racket he couldn't identify and I couldn't hear, which he finally tracked down to...an ant walking around in the trash can.  But this time, he said it sounded like a police radio, and I naturally perked up.  We peered out the window, and sure enough, there were three police cars about 20 feet from us, visiting the home of one of our neighbors who didn't have air conditioning.

This is the best photo we could get.

Unfortunately, the photo is a lot better than any information we could glean because we kept a very low profile out of fear of spending a night in jail (jail is one thing, but we didn't know for sure it would be air conditioned).  The next day, the aftermath included an absent male half of couple, with the female half removing what looked like chunks of paneling from the trailer and putting them in the back of the pickup.  Said female half was also sporting a bandage, and did not appear to have driving privileges for the pickup, as an acquaintance arrived at arround noon to pick her up and returned her just a few minutes later, evidently after a shopping trip to the nearby convenience store, for fresh vegetables and natural fruit juices, I'm sure.

More excitement was provided by the Velocity Games.  They used to have the the U. S. Open Windsurfing Championships over Memorial Day weekend, but windsurf racing is awfully dang boring, so they added skateboards and kiteboards and changed the name, all to appeal to the under-30 crowd.  An event was born.

Perhaps one reason windsurf racing is boring is that you can hardly see anything from the shore, and what you do see is some triangles moving around in the distance.  But I think more importantly, most racing takes place in light wind, so racing equipment consists of these enormous sails and big fat stupid boards that allow them to scoot around when most smart windsurfers would blow off sailing completely and do something productive instead, like shooting the breeze while sitting on the tailgate of a pickup.

But this weekend, the wind did not cooperate and blew like stink.  They had to cancel races because [insert scaredy cat crying sounds] "Ooh, there's too much wind!"  Babies.

Don't get me wrong, it's not as if yours truly had any intention of sailing in that much wind, but I don't pretend to be anything but a hobbyist hack who has carved a little niche of windsurfing that suits me.  Some racers possess a bit of an attitude, and I find it the height of silliness that they can't ply their trade when there is wind that most other expert windsurfers would kill for.

Here are some "action" shots from the competition:

It is pretty impressive, though, how these people can wrangle that beastly equipment of theirs. 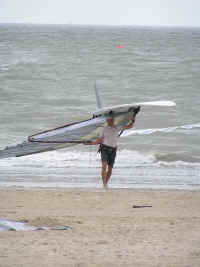 We then moseyed over to the skateboard competition, which I am somewhat surprised to report was not my first attendance at such an event.  I don't remember under whose auspices it was, but about 10 years ago, there was a skateboarding competition in Austin that included Tony Hawk and I jumped at the chance to see him in person.  One really nice thing about that event was that it appealed to young boys, and for once I was one of the taller people in the crowd.

Frankly, I'm not real familiar with who's who in skateboarding these days, but I didn't recognize any of the competitors in Corpus.  However, this guy proved to be a crowd favorite with a very fun display of derring-do. 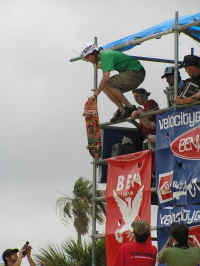 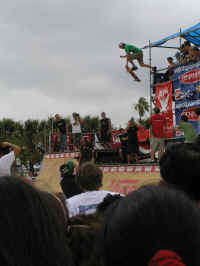 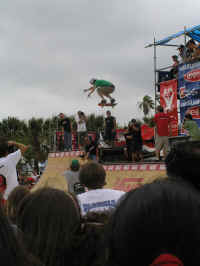 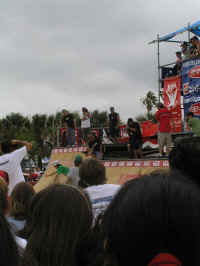 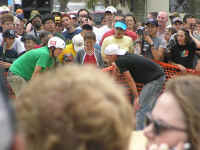 Which leads us to kiteboarding, yet another group of people I seem to have a grudge against.  There's no denying that kiteboarding appeals to the same sort of people that snowboarding does, and a pleasant day on the water for a windsurfer can be easily ruined by a kiteboarder, just as a pleasant day on the slopes for a skier can be easily ruined by a snowboarder.

I used to chalk up the dangerousness of the kiteboarding to beginners who have more nerve than skill, but it turns out that injuring and killing people among kiteboarders is an equal opportunity sort of thing, which doesn't discriminate based on skill.  But since I wasn't trying to share the water with them this day, I was able to enjoy their antics. 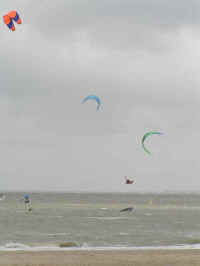 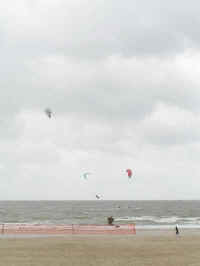 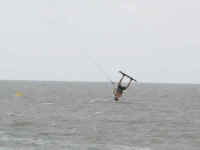 Unfortunately, it doesn't show very well in this photo, but to me, all those kites flapping wildly in the wind reminded me of the licking flames of hell:

Okay, the REAL reason we went to the Velocity Games:

Here are some very orderly tourists:

Our own personal windsurfing that week was el supremo, as usual, and this time we suffered no injuries to either person or equipment.  Carey actually worked on technique, and it shows--he routinely planes through his picture-perfect jibes, and has conquered the diabolical "duck jibe" as well.

Also on this trip, I got to meet the token chick among the geezer windsurfers, Dick's wife Arleen.  Arleen is 70-something (to Dick's 80) and sails far better than I would even dream of.  She said she's been slowing down recently, though, sometimes blowing a jibe here and there.  The horror!  She's not sure whether it's her shoulder injury that's causing it, or maybe the fact that she's blind in one eye--all I know is that my complaints about the effects of the ravages of time on me are looking pretty lame.

We had yet another stop at Noah's on the way back to Austin, with nothing much accomplished except the most unbelievable carpet cleaning I've ever had the misfortune to witness--imagine a Laurel and Hardy routine involving a high-powered cleaning machine, some hoses, and plenty of soap.  We finally made them stop before they could wreak any more havoc, and headed back to Austin.  It worked out that I was able to go to the UT baseball team's regional and super-regional tournaments, on their way to the college world series, while Carey used that time to get everything ship shape for him to return to Los Angeles for another extended engagement with the folks at Road Safety. 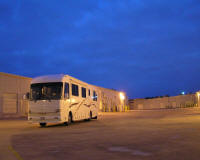 And at some point during all this mess, I had a birthday, which Carey commemorated with a truly incredible apple pie:

Go here and click on the guy's picture to get a series of photos of pie making in progress--you're not going to believe it.  And while big is always better when it comes to a Smith and food, this thing tasted heavenly, with a crust the likes of which I've never encountered although I'm sure I would have to pass by a couple of pounds of butter on the way.