After about two weeks camping at Padre Balli, we grew tired of the grueling 15-minute commute to Bird Island.  Of course, when we lived in Austin we would have to travel 4-1/2 hours back home after a day of windsurfing, so I guess we were getting spoiled.

Anyway, after an assist from the internet, we found ourselves a new home with an even shorter commute:  Laguna Shore Village RV Park. 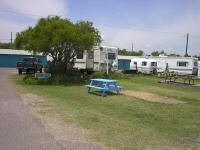 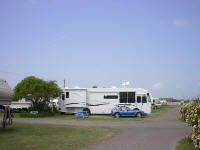 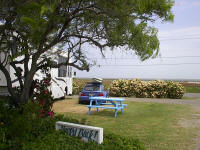 It's in Flour Bluff, which is across Oso Bay from Corpus Christi but before you get to the JFK Causeway to Padre Island.  In other words, in the middle of nowhere.  Which is not necessarily a bad thing.

We drove by in the car on a Sunday afternoon to scope the place out, and noticed people windsurfing right by the RV park.  Hmm.  We pulled off the road on some private property and a guy approached us, we assumed to tell us to get off his property.   Instead, it was Chester, an ex-commodore of the Corpus windsurfing club, who lives in this house: 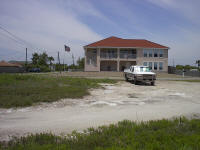 Talk about a sweet setup.  He built this house in this location for a reason--he can keep his sails rigged in the garage and carry them to the water, which is right behind where the cameraman was standing.

Chester was extremely welcoming and filled us in on the local knowledge.  The only concern with sailing in the Laguna Madre right here is that it's extra-shallow in spots, and you have to know where the spots are or you'll run aground, something you don't really want to do at 20+ mph with your harness hooked to your rig.  And it's a big area you have to get to know--we were sailing a few miles south of the JFK Causeway, which is the horizontal line in the picture at the top of this website.

However--and this is a big however--because the water is so shallow, it's really smooth until the wind starts seriously howling.  Smoother than at Bird Island.  Scary smooth.  And generally a little windier too.

And being down here, the wind is steady instead of that gust-athon roiling tank known as Lake Travis.  You simply cannot imagine how easy it is to sail here by comparison.  We decided it's like those groomed ski slopes that are rated for experts but honestly are more intermediate level--ego slopes, as featured at Deer Valley, say.  You get to go really fast and make nice turns and generally think you're a lot better than you are.  Shoot, even yours truly was jibing at speed (well, entering the jibes, anyway).

Another Deer Valley-esque feature of this site was the carpet some of the locals had laid down to rig on.  Pretty luxe: 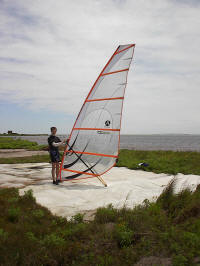 Okay, so it's really great except for being too shallow in spots--that's not too bad.  Unless you're into aesthetics, in which case there might be trouble.  This place is not really pretty, and the fact that people use the property where we were launching as an illegal dumping ground certainly doesn't help matters.  I spent one day picking up trash, avoiding the broken glass that I couldn't begin to penetrate.  Here's the beginning of my haul: 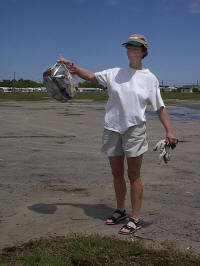 And there were about 10 more where that came from as well, including two hypodermic needles about 50 feet from shore, plus a girly magazine.  But nothing beats the unmentionable item I found when I was picking up trash in the dunes by Bob Hall Pier a couple of weeks before, almost pushing an inveterate trash picker-upper like me over the edge, although according to one guy out there, similar items have been found near the rigging carpet.  Really uncalled for.  Oh, and there were the goat heads I heard somebody left out there once.  Santeria anyone?

Despite the aesthetic considerations, you can see people out in the distance having an awful lot of fun: 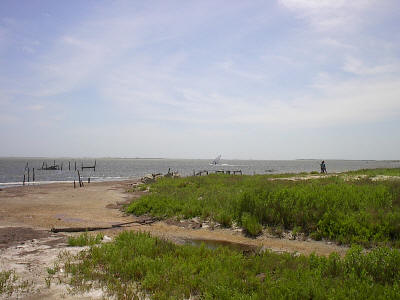 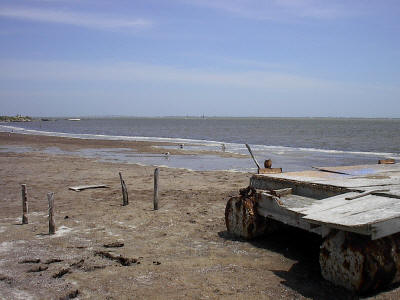 The crowning glory of this launch is the people there.  I have never met such a concentration of friendly people in my life, especially in a sport that can sometimes be a bit testosterone-driven.  Maybe it helped that it was a generally "older" crowd.  We generally include ourselves in that designation, but some of these folks were in their 70s and 80s.  Carey and I dubbed it Geezer Beach until one of them told me the official name is Geriatric Point.

Here are some Lagunatics in action at Geriatric Point, through binoculars--not sure what they're squaring off about, but I suspect violence will be averted. 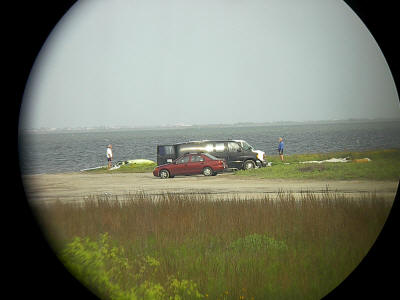 We would look out the windshield and see which cars were there and say, "Dick just pulled up, oh there's Carl."  These guys can really sail.  Of course, they should be good by now, given that they're out there pretty much every afternoon.

The sailing was really really fun, and I was not going to let Carey to be the only one to shed blood on this trip.  That's a gouge of varying depth all the way down (not dripping blood). 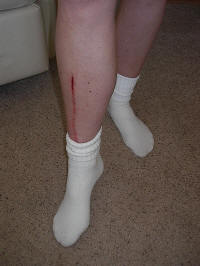 Tragically, I lost my beloved Casio watch during that particular wipeout, and also assassinated my favorite sail by hurling my body through it.  Bummmmmmer.