By late in our stay the simulator was finally running well enough that Carey was able to take off a couple of weekend days.  One of the things we made a point of going to was the big Los Angeles Auto Show, which quickly revealed itself to be an all-day affair.  Carey has coveted a Lotus Elise for some time [since 1995 - ed], but until now they've been available only in Europe.  The 2004 L.A. Auto Show was the long-awaited debut of the U.S. model of the Elise.  Lotus had a display of several of them together in all different colors, and it looked like someone had left all his toy cars strewn about.

This was the diminutive car that we had envisioned using along with the Toyhouse-type RV with the 12-foot garage in back when we were trying to decide what RV to get.  But since we decided to go with a motorhome instead of a trailer, and therefore don't have a big pickup truck to serve as a utility vehicle, having the little Lotus be our only car is not practical now; while the Elise could theoretically be towed, it's just not the cargo hauler that the M-Coupe is. 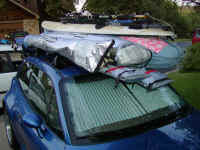 Faced with having to forgo a perfectly cute little car simply car due to its inability to accommodate the big pile of equipment needed for windsurfing, we realized the solution was to take up "regular" surfing instead and have a lot less junk to have to tote around.  Well, not really.  We just thought it would be fun.  And it was!

We took a lesson from Paul at Ventura Surf School.  The night before, I practiced lying on my stomach and tucking my legs under and jumping up to a standing position, just to be sure I could do it--it's one thing to suck at something, it's entirely another not to be able to even approach doing it because you can't haul your carcass up to the proper position.  Anyway, I could do it and I issued myself a medical clearance for lessons the next day.

We headed out early in order to drive along the coast a bit.  It was the weirdest weather.  There were these fog banks that just appeared out of nowhere, and seemed to have completely discrete edges.  But nobody along the road seemed alarmed, so we figured it was business as usual.  But I knew I didn't want to surf in such low visibilty and rotten weather.

But it turns out that the clouds just do that along the coast there.  Here's a photo of a cloud just sitting there, right where we were going to surf.  Half a mile down the road, it was socked in completely. (That's me on the left.  It was cold, but it was January, for heaven's sake.  I'm not complaining.) 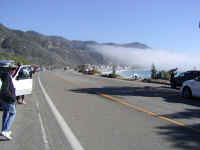 Those gigantic pastel things on the shore are our boards.  They're made of foam, which is relatively kind to skulls and other body parts that are likely to get in the way. 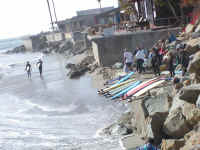 We didn't get any pictures of us surfing, but here are some other folks out there that day, enjoying the waves that turned out to be pretty much ideal for novice surfers like us. 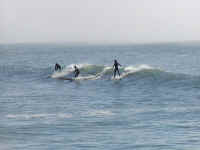 I think this was some sort of weenie surfer area, which suited me just fine.   On the beach, we learned how to paddle by lying on the board and digging in the sand, and practiced the critical maneuver of hopping up onto the board.   Then it was time to hit the water.  The 57-degree water.  And I just have to believe that windsurfing on a tippy board out on choppy, gusty Lake Travis has finally done me some good because I was up and surfing on the first ride!  Admittedly, Paul was helping--he'd have us lie on the board ready to start paddling toward shore, and when a suitable wave came he would push us forward.  But you could tell when the wave started pushing, too, which is when it's time to pop up.  And ride!  It was a blast.

We both did far better than we expected, although the cold water eventually took its toll on our feet, which stay in the water all the time except when actually riding the board standing up.  And that's not all that much time.  We windsurf in water this temperature, but our feet aren't submerged as much.

Eventually, our feet felt like blocks of ice, and Carey's were really numb.  Makes it just a little harder to balance.

Perhaps we could have exerted ourselves a tiny bit more (and made ourselves warmer AND kept our feet out of the water a little bit) if we'd paddled back out to the waves every time after a ride.  Instead, we figured out we could walk the board back out there, which was a LOT less effort.  Paddling is way too hard to be considered any kind of fun.  (And I now understand why people wait and wait and wait for the right wave--you really don't want to have to paddle back after riding a crummy one.  But then you're sitting there with your feet dangling in the water.)

I noticed that nobody else walked their boards out, and didn't think that we were the only ones clever enough to figure it out.  So I asked Paul if it was a faux pas to walk the board out rather than paddle, and he assured me that it most certainly was.   At which point I decided, appearances be damned, I don't want to exhaust myself in the next ten minutes, I'm walking the board.

I told Paul that in order to preserve his reputation among the shore denizens, he was welcome to report to them, "I told them to paddle those boards, and they just wouldn't do it."

Finally, we were spent.  We decided, "Next good ride I get, I'm going all the way in."  Yes, we talked not only about our next ride, but our next good ride.   We were surfing.

One other classic Southern California-ish thing we did was to see the floats from the Rose Parade.  We didn't dare brave the parade itself (we were still reeling from the Christmas Day crowd at NBC Seafood), although we accidentally ran across the route when we were poking around Pasadena on Christmas.  But they put the floats out on display for a couple of days after the parade, and you can get up real close to see them.  If you can get through the throngs of people, that is--being early really pays off. 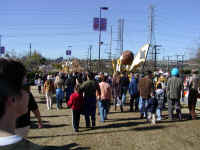 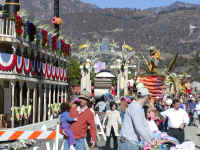 It was unseasonably cold this year, which was good for the flowers but not so good for the people making the floats, who were freezing in the warehouses where the floats are built.  The floats are required to be covered by flowers or plant material.   They grind up seeds for the flat-looking areas, and use leaves and things like that.  And millions of flowers.

We found out that there are professional float builders whose entire industry is, well, building the floats.  The Rose Committee has this byzantine selection process for which proposed floats get in the parade, based on the theme (this year it was "Music Music Music"--pretty generic, and I think the float builders sometimes stretch to make the designs fit the theme) and overall scheme for how they want the parade to look ("No, we already have a jukebox float").  The float-building companies engage in tactical maneuvers for when they want to present which floats, to increase the odds of getting in.   After that, the sponsors are matched up with the approved floats.  It's certainly not the Indio Tamale Festival Parade.

But the results are pretty impressive. 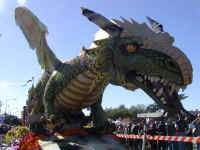 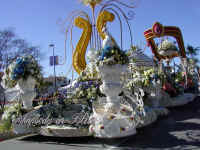 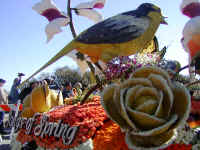 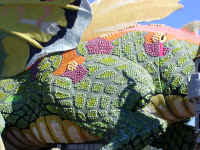 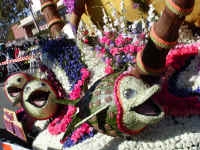 However, Cal Poly University enters an all-volunteer float designed and made by its students.  And it's great!  So take that, all you professional float builders! 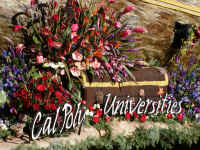 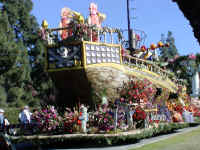 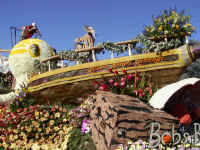 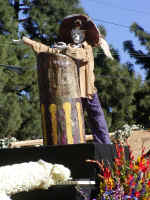 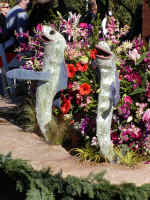 To open a new window and see our full photo gallery of the Tournament of Roses Parade Floats, click this link.