"Pilgrimage to Slab City and Windsurfing the Salton Sea"

Carey was secretly thrilled that we could stay at Bob's RV Roundup in Indio for only two nights, because he was really wanting to stay at the Salton Sea.   Now that I think about it, he just SAID they told him we could be there only two nights.  I've got to remember to double-check these things, especially when the alternative is...the Salton Sea.

Where to start.  The Salton Sea is an enormous, and I mean enormous, lake in the middle of nowhere sort of in the Palm Springs vicinty.   Thirty-five miles by 10 miles, and quite intriguing looking on a map or from an airplane.  For example, we have this post from the rec.windsurfing newsgroup:

About a month ago, during a trip to Anzo-Borrego (a beautiful desertic area, covered with flowers at spring time), I decided to check out the Salton Sea which I had seen each time I flew to/from LA.  From a plane, the Salton Sea (it's a lake of about 35x7 miles) looks like a magical place... an deep blue island of water in the middle of an ocean of desert...

Well, when I got there I realized that a closer look to the place gives you a brand-new perpective of that "paradise" as a matter of fact the denomination of "hell" would be a better fit. Imagine a open air sewer of filthy, salted water, surronded by fields sprayed with chemicals and other pesticides, governed by an army of relentless mosquitos raiding on the rare tourists and enjoying the windless, humid, nauseous air...

Here's the whole thread for your edification.

The place has no shortage of history, but basically, the reservoir was formed about 100 years ago when somebody wanted to divert some water to do some irrigation.  They put a little hole in the levee and that worked great, except the little water that came through quickly turned into a lot of water as the hole expanded due to the water coming through, as such things will.  This went on for years until a railroad guy stepped in to keep his railroad tracks from flooding, so he put up the money to fix the thing.

The result is a huge reservoir 200 feet below sea level and salty as hell because there's no exit for the water other than evaporation, which leaves the minerals there.  It was a very popular recreation destination in the 1960's, with the development to show for it.  However, the Salton Sea is definitely not becoming more attractive every year, what with increased salinity, algae blooms, fish kills, and a distinctly unpleasant odor thereabouts.  The once bustling tourist and recreation areas have dried up, and people are staying away in droves.  We actually saw a flyer on a bulletin board up north of Joshua Tree advertising a house for sale on the Salton Sea, including this proviso:  "It's not as bad as you think."  I thought it was funny until I actually went there.

But all is not lost.  It is a real treasure for birders because of the millions of birds that migrate through there.  However, landfills are also good places to find birds, a point not lost on me.  And of course the person to lead the charge in Congress for saving the Salton Sea was...Sonny Bono.

And in case you still don't believe me, take a look at this Mortality Roster for birds in the Sonny Bono Salton Sea National Wildlife Refuge; causes of death are botulism, cholera and salmonella.  Yum.

Lucky for us, there are RV hookups conveniently located near the water in a location that will work with the north wind predicted for the next day.   The guy who said there's no wind there can't be entirely accurate--there are wind FARMS nearby in Palm Springs, for heaven's sake.  And also near Palm Springs is the perpetually on hold and I fear moribund windsurfing venue at The Ponds.  It's just what I imagined putting near Lubbock, only there's no water up there.  Wait--there's no water at The Ponds either.  Big problem.  I wonder if the people developing The Ponds have considered diverting water from the Salton Sea.  Probably not.

Back to said sea, this is the nice enough looking main entrance: 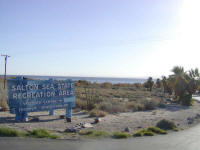 A nice panorama from our campsite:

And a view from the shoreline back to the row of RVs: 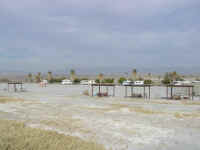 There  wasn't any wind the day we got there, so we decided to visit THE SLABS, a place that does look as bad as it is.  Technically speaking, it's called Slab City, but that's so elegant sounding.  If you thought the Salton Sea was weird/unbelievable/dispiriting, you ain't seen nothing yet.

First stop, Niland, California, 25 miles south.  I don't know if Niland ever had anything going for it, but if it did, it's gone the way of the Salton Sea.  I wanted to commit suicide just driving into the place.  Nothing, absolutely nothing, there, and what is there is ugly and rundown and depressing.  I'm not the only one who thinks so, although this guy seems to think there are far more nefarious things happening in town.  At least he thinks something's happening...I wasn't even that optimistic.

We didn't make the obvious left to the Slabs, but rather went a little farther down the road and drove back up through the "neighborhoods" to head toward the Slabs.   The less said about that the better.

Traverse a vicious railroad crossing that almost swallowed Carey's car, and behold...the Slabs, an abandoned naval base in the middle of nowhere, right next to an active military bombing range.   The base was razed, and all that's left are the concrete foundations, hence the name.  It's an anarchic "society" full of misfits and weirdos.  You just park pretty much wherever you want, for free, although I got the feeling there were "neighborhoods" and that some were better than others.  There are no facilities whatsoever, except a shower of sorts, described about 3/4 of the way down this website; supplies are available in Niland, and you already know what that's like.

Now, about the website with the picture of the shower--it paints what I consider to be a particularly romantic view of the Slabs.  I found the place to have a weird vibe, which led to a "get me out of here, but I just have to look around first" sort of visit.  That limited our picture taking, but here's a sampling.

Upon entering, you see Salvation Mountain: 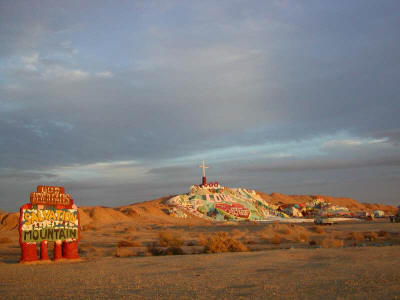 Then you just cruise around gawking in disbelief and feeling the cold stares of people as you bump over rutted dirt in your Estoril blue BMW sports car. 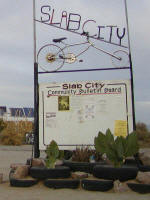 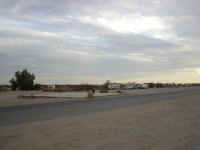 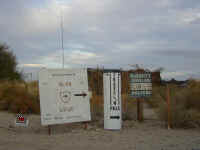 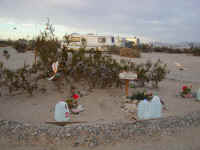 Even though I'd argue that the Slabs is literally indescribable, one intrepid Brit took a stab at it.   And here are some arty photos of the Slabs, and a panorama for those of you with fast connections.

After visiting the Slabs myself and reading up on it, my take on the situation is that a long time ago, it probably was a pretty cool place, with RVers who come to warmer climes for the winter ("snowbirds"), oddball characters who just like it there, and a few relatively scary types who are drawn to places like that but don't really bother anybody.  But as with all utopian societies (including the City of Austin), the end is inevitable.  The Slabs is now littered with trash and abandoned trailers, and as you can see from the articles I linked to, some of the denizens are pretty scruffy and are there not because they want to be but because they have to be.  That's never a prescription for a healthy society.

So I've been there, I've seen it, and I don't have to go back if I don't want to.   Which is not to say I won't, a semi-prediction I can't really explain.

After all that, windsurfing the next day in the Salton Sea was a relief of sorts, although all this "weirdo" and "oddball" namecalling came back to haunt me a bit as I placed my human body in the dreaded Salton Sea.

The wind howled that morning, as predicted.  We were slow to get going (I kept thinking something would save me having to actually do this), and by the time we hit the water, the wind was dying.  I'll say, however, that it was nice to get on the board again.  What wasn't so nice was the lovely white beach, which it turns out consists of barnacles that, according to the campground host I talked to, were brought in on boats around the time of World War II.  I actually found some corroboration of this story.  Wherever they came from, they'll slice your hands and feet to shreds if you touch them.

And the water is definitely brown, made all the more unnerving by this thread in the rec.windsurfing newsgroup.  And it stinks, although Carey has cheerfully pointed out that the stink is only along the shoreline--it smells fine once you're a ways out there.  Fine for us, but when a group of about 10 people showed up later to picnic right along the shore, I had to question their sanity.

As for the sailing itself, the salty water makes for really soft chop, so when we did get going, it was a nice ride--far nicer than what we get on Lake Travis in comparable wind.  Can't really testify about the buoyancy because when I fell in, I didn't tarry.  Not because I was squicked out, but because the water was cold.  I swear.  And it really didn't stink once you got away from the shore.  And heaven knows there wasn't any boat traffic, menacing or otherwise.  All in all, not a bad day.

It is with great pleasure that I present photographic evidence of our adventure: 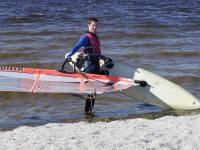 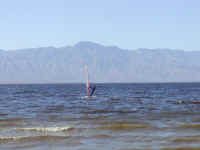 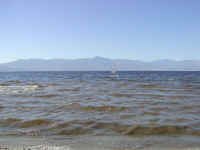 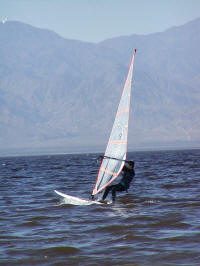 To open a new window and see our full photo gallery of Slab City and the Salton Sea, click this link.