We woke up refreshed and ready to get going.  Debbie went to the grocery store and I got out my trusty voltmeter and started poking around to figure out what might be wrong with the water heater.  RV's have an array of energy sources onboard, and most appliances can draw from a choice of several of those.  The water heater can either burn LP gas (propane) or use a 120 volt electric heating element.  Naturally, there is a maze of switches, interlocks, circuit breakers, and fuses scattered around to keep everything safe, and just figuring out where all these things are hidden away in a coach this size takes some hunting.

Long story short, the water heater furnace wouldn't light because of a bad connection at a 12V fuse under the dashboard that controls the propane valve.  I still haven't figured out why the 120V electric element wasn't working, possibly the thermal reset switch buried underneath needs resetting?  But anyway, with that APPLIANCE fuse appropriately jiggled, the gas fired right up and soon enough we had 10 gallons of hot water on tap.  Nice. 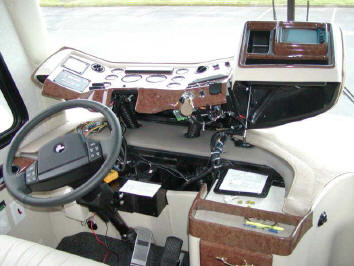 With that resolved, we were ready to button everything up and get rolling.   Everybody recommends making a departure checklist so you don't forget things like lowering the TV antenna, closing the drawers so the slideout don't crush them, raising the leveling jacks before attempting to drive off, and endless other such embarrassing and costly gaffes.  So Debbie started writing us up such a list as we got everything prepared to travel.

Following the handy maps Konnie had provided, we slowly rumbled our way out of the park and out onto Interstate 205, headed south.  We had originally planned to go east through Idaho, Utah, and Colorado, but looking at the weather forecast showing cold and snow all through the Rockies, we decided to head down to California and then across Arizona and New Mexico, which was only a little longer anyway.

One of the first things on our route was a bridge across the Columbia River Gorge, well known to us windsurfers as one of the windiest places in the US.  Sure enough, the big Alfa caught plenty of air going across that long span, and wanted to crab sideways, but by just going slow (40 mph) it was plenty controllable even in that rainy, morning traffic.  It was nonetheless a relief to get across the Gorge and out of Portland.  After that, the next 2300 miles would seem like a piece of cake.

Not far out of Portland was a Camping World, which is sort of the Home Depot of the RV world.  We needed some supplies so we decided to stop and shop less than an hour after setting off, which Debbie mused must be some sort of record. 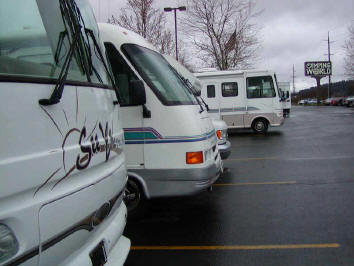 We spent quite a while in there studying all the cool doo-dads, and eventually emerged as President's Club members with several bags full of goodies, including the aforementioned sewer adapter and extension hose, a water extension hose and pressure regulator, a voltage tester, a 15/30/50 amp adaptor box thing made by some guy in Florida who says to call him with any questions, and a nifty pair of rechargable walkie talkies.  Oh, and some simple 12V light bulbs to replace a couple we'd noticed were burned out. 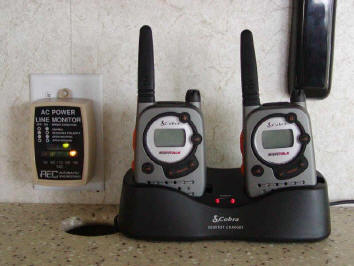 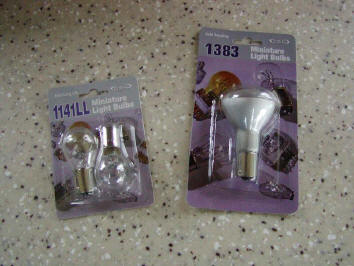 Excitedly, we unpacked and plugged in all our new items, including the simple light bulbs, and rearranged a few other bulbs so the fixtures all had matching buibs.  Did someone say simple?  Well, even with new bulbs, some of the fixtures still didn't light.  Weird.  After a little poking around, I discovered that the dreaded water heater problem had returned also -- the propane wouldn't ignite.  So up came the dash again, and sure enough, our old friend the APPLIANCE fuse was totally blown and no amount of jiggling was going to revive it this time.  There was a SPARE fuse in the block, so I tried swapping that in, and "BANG!" it immediately popped in a flash of light before I even got it seated.  Hmmm... let's try that again with the water heater switch off... Ooops.  Confident now, I borrowed another seemingly unneeded fuse labeled AUTO DESTRUCT or something, and popped that in there.  "BANG!" again, and another fuse bites the dust.  What the hell?  One more try, this time flipping the two bedroom light knobs around, thinking maybe they were on.  Surprise, yet another "BANG!" and yet another fried fuse, this time borrowed from ENGINE or some similarly important-sounding function.

So I puzzled for a while, deployed the ohmmeter again, and eventually resorted to the classic science principle of Occam's Razor, which says the simplest theory that can explain something is probably the right one.  And the simplest theory here was that somehow, those silly, stupid, simple little light bulbs must be causing the problem.  So we yanked 'em all out from their sockets, and were amazed to discover that they were not as simple as one might expect.

In addition to the large cylindrical side contact, some had two base contacts while others had only one.  Examining the lamp fixtures revealed a similar phenomenon -- the bedroom sockets had two contacts, while the living room sockets had only one.  We had apparently put "single contact" bulbs in those "double contact" sockets, and the large single base contact had bridged the the two socket contacts causing a dead-short which naturally caused the fuses to blow instantly.

With that simple realization, we dashed back into the Camping World, bought a handful of assorted fuses and bulbs, and before you know it had everything sorted out and running properly again.  Of course, by now it was getting well on into the afternoon, and we were barely out of Portland.  Luckily, we didn't have a deadline to meet on this trip, and we were definitely learning things in a hurry. 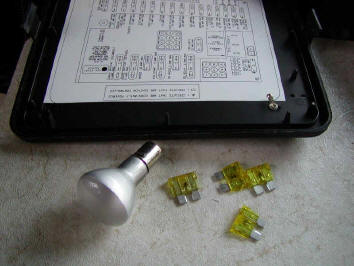 We ended up driving all of two hundred miles that day, and stopped off for dinner at a Carl's Jr. in Roseburg, OR, around sunset.  Unfortunately, or luckily, depending on your point of view, we had arrived on a weekday, as this Carl's Jr. featured a small stage and promoted Saturday night karoke.  Oh my!  Debbie studied our mighty Trailer Life Campground Directory and found a nice-sounding RV park just down the road from us, so we headed off into the dark to search for it, which we had not planned to do but found it hard to avoid on this trip.

The Rising River RV Park proved to be a great first campground for us, being uncrowded and featuring long, wide, level pull-thru sites with 50 amp power.  Here's a shot of the rig set up there at night: 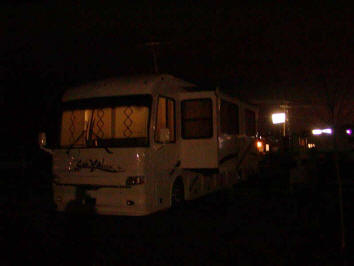 The campground also had a blissfully empty little recreation building with a pool table, Casiotone, board games, and whatnot.  Debbie played a few tunes on the fake ivories and we shot a couple of games of pool.  For the grand finale, I called and actually made a full-table jump shot to sink the eight ball into the corner pocket.  Like some stunt out of The Color of Money, this was an amazing thing to see actually work after decades of attempting such silly shots, which usually just annoy my opponent who has to go retrieve one or more balls from the floor afterwards.  Truly the pinnacle of my pool playing career.  Woo hoo! 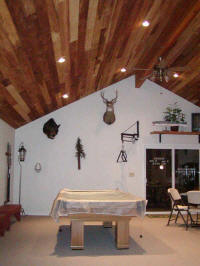 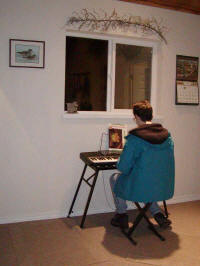 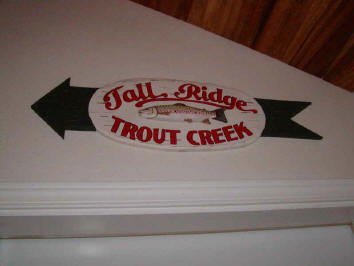 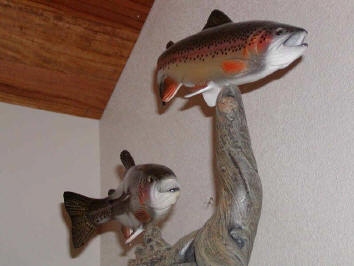 And here's the rather idyllic views that greeted us the next morning: 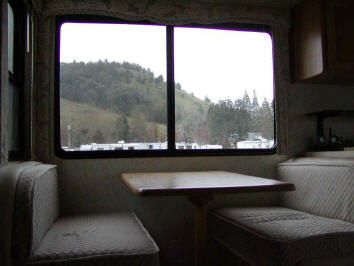 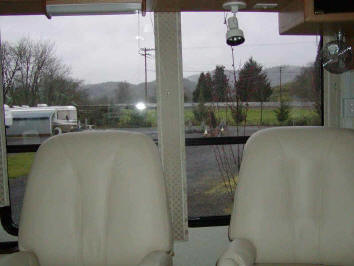 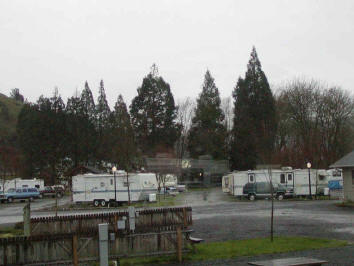 Yep, I think we can get used to this.