I aspire to correct that trend in 2009 and ride more dirt (heh).

That said, I started the new year off with a road riding classic, Rim Rock Drive through the Colorado National Monument here in Grand Junction, that logged 50 miles into the "wrong" column right off the bat. Been pretty cooped up for the last couple of weeks with snow and ice and have only barely been able to ride the trails, so decided to swap out my knobby tires for the Marathon Racer semi-slicks the bike came with, pump up the shocks to "almost rigid" pressures, and hit the road.

The morning started off at a chilly 18 degrees, which felt much colder with the wind chill on my face at the 15-20 mph speeds I was able to maintain with relatively little effort with these tires. It was so cold I didn't want to go as fast as I could, which is pretty strange!

Soon enough though, the road turned uphill, and I had about a 500 foot climb on Monument Road from town to the entrance to the national park. That slowed me down and made me work, and I started to warm up a bit and figured I was going to survive the day after all. The red cliffs of the monument were starting to poke through the morning haze ahead, which also helped keep me spinning: 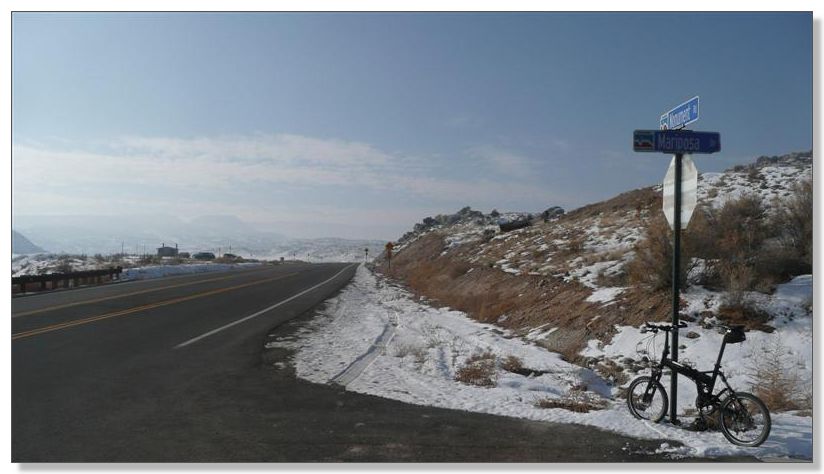 By the time I reached the park entrance, the skies were clearing out nicely, and I paused to remove a few layers of clothing before starting the biggest climb of the ride: 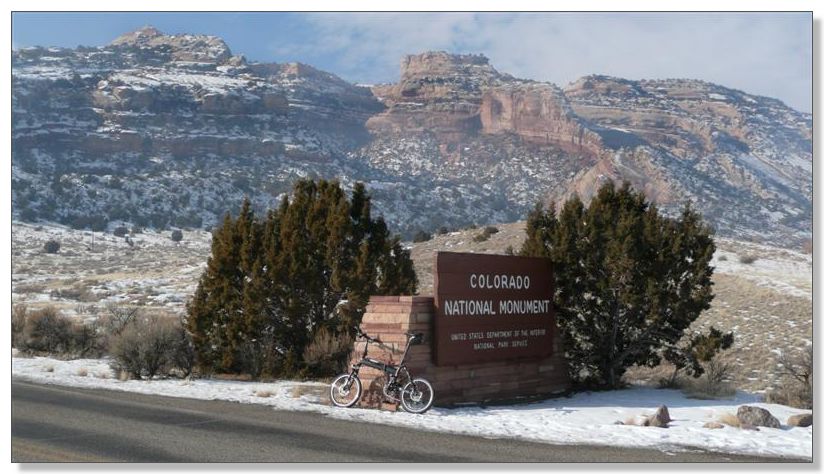 The main climb of the day was about 1000 feet of vertical in 4 miles. I must say it almost felt like cheating to do a climb like that on pavement instead of dirt, but I'll take it: 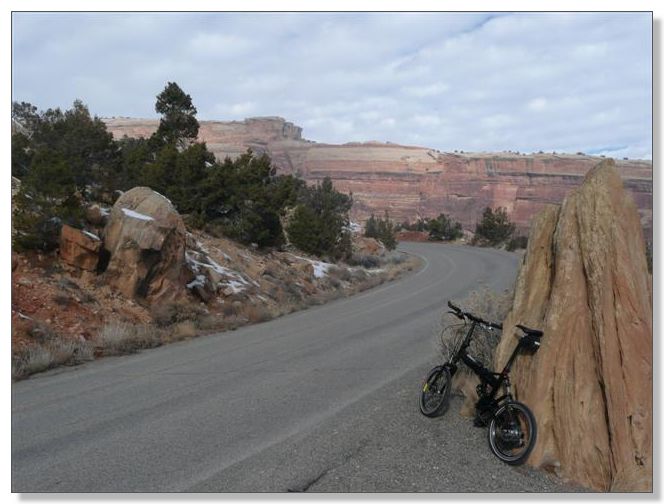 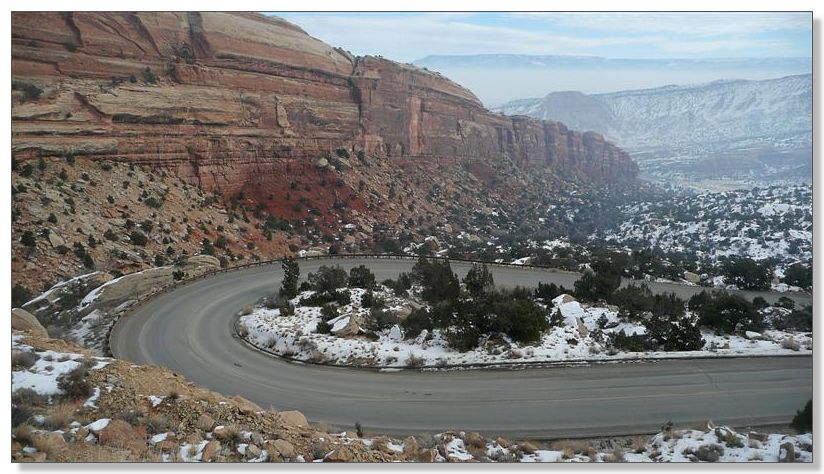 Ominous skies to the east, but luckily, I was heading west: 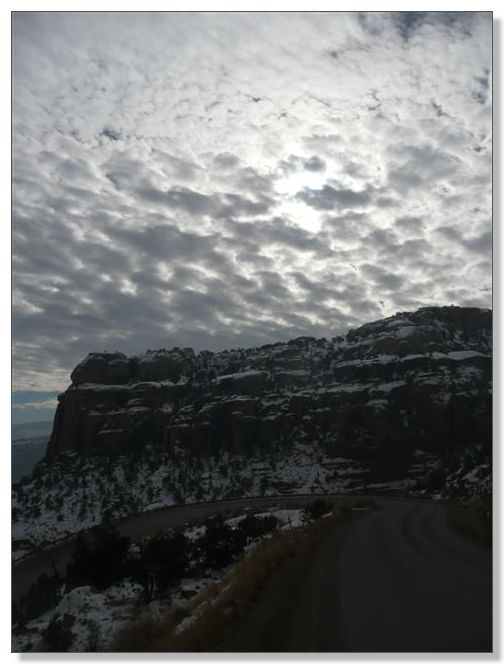 A 300 foot long tunnel bores straight through one of the large stone ribs that characterize the landscape: 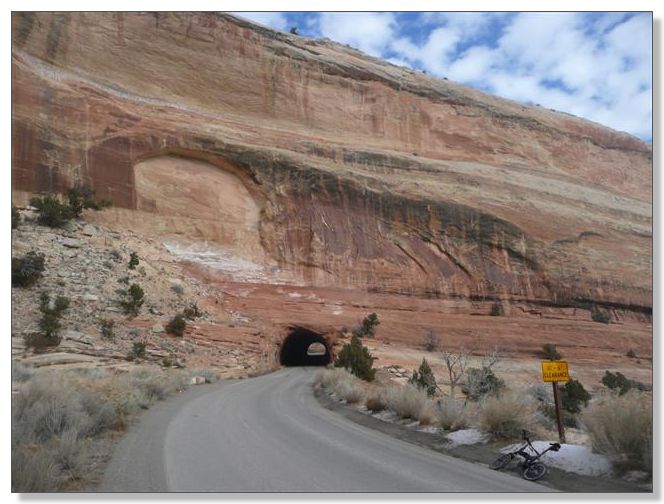 There wasn't much traffic on the road, but I sprinted up through the dark tunnel as fast as I could anyway, and emerged to find that the other side looked a lot different: 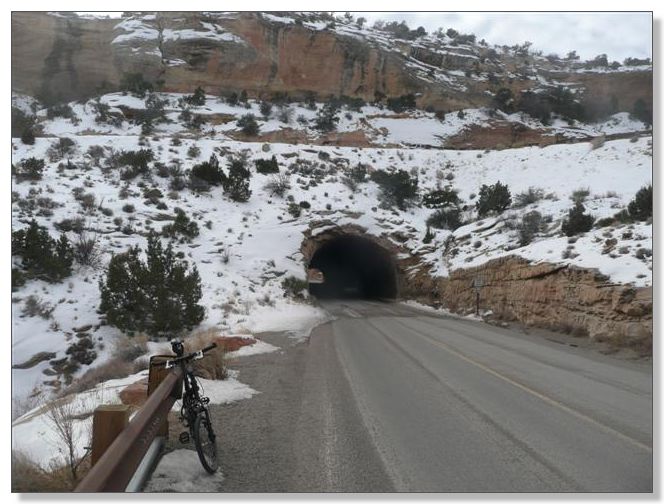 After a while I reached the rim at around 6000 feet. The road up top winds along the rim of the canyons and offers many overlooks. It had been only intermittently plowed, and was frequently covered with a thin layer of packed snow that rolled very well indeed. The packed snow offered plenty of traction, and I was comfortable cruising at around 20 mph on the flats. Great fun! 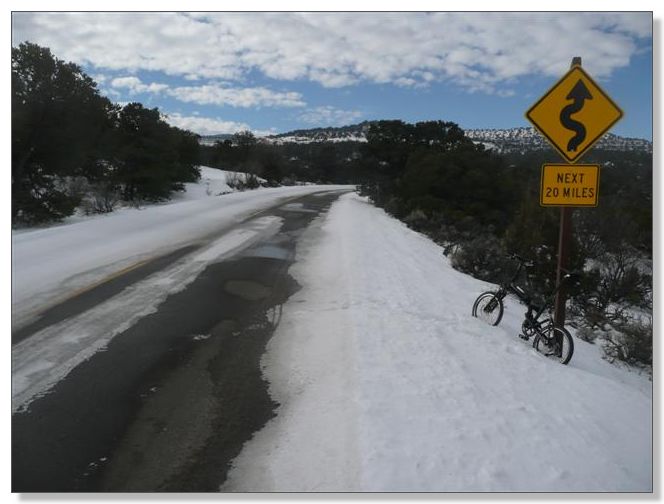 Rim Rock Drive is definitely the "scenic route" between the two mountain biking meccas of Grand Junction and Fruita. This is just one of the many incredible views better savored by bike than car, just off the side of the road: 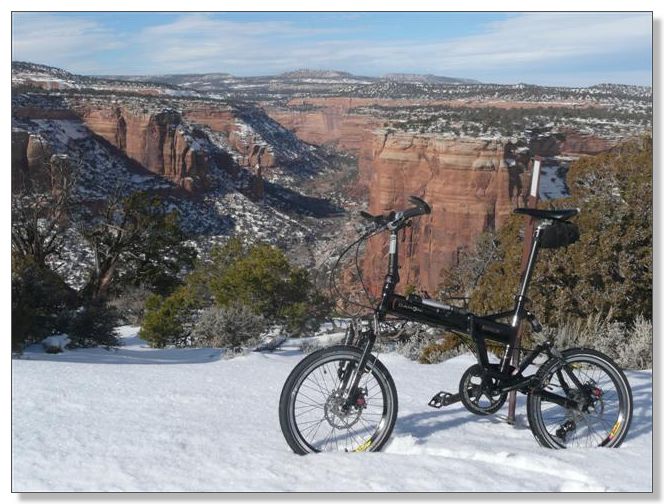 The Bookcliffs peeked through the haze from this overlook: 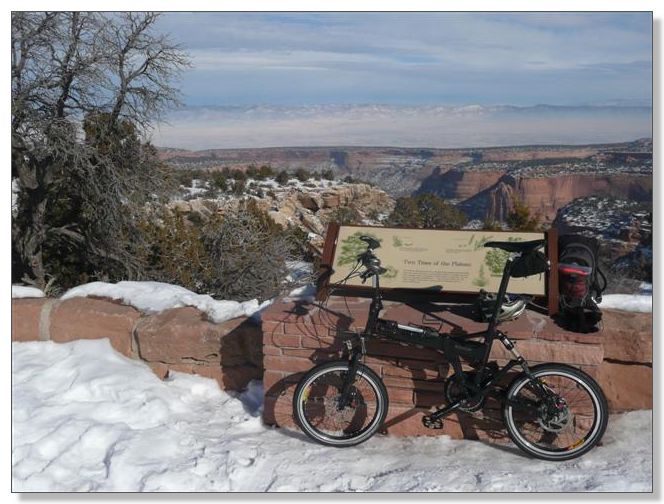 This long, curvy, moderate downhill was most welcome after topping out around 6600 feet (never mind that l'd be going back up this in about an hour!): 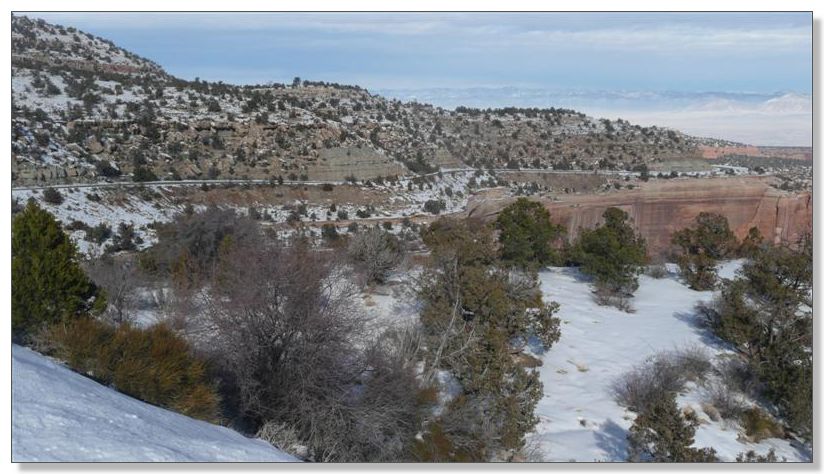 One excuse after another for a rest stop presented itself: 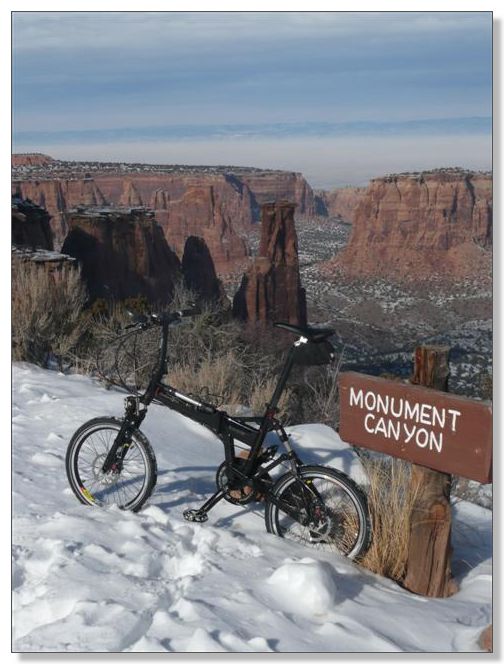 Independence Rock with the Grand Mesa beyond: 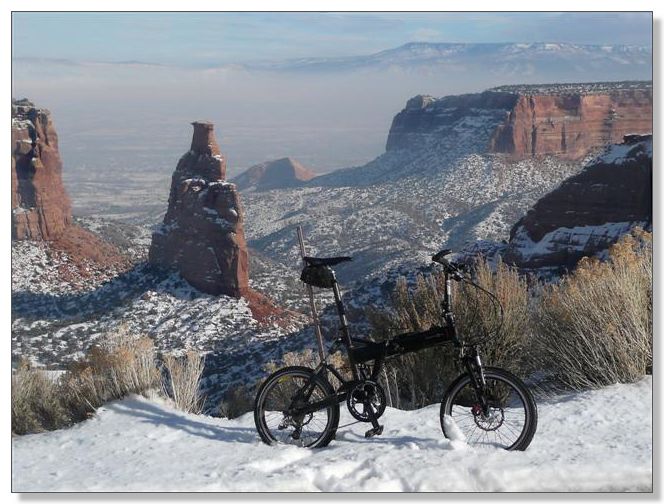 This spectacular bit of road is carved into a huge sheer cliff: 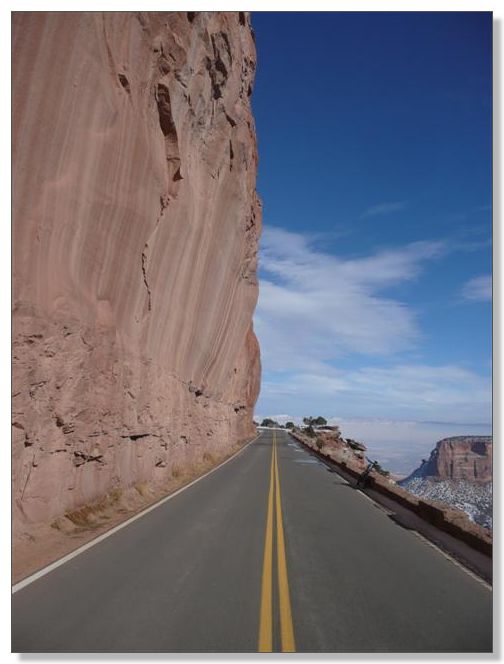 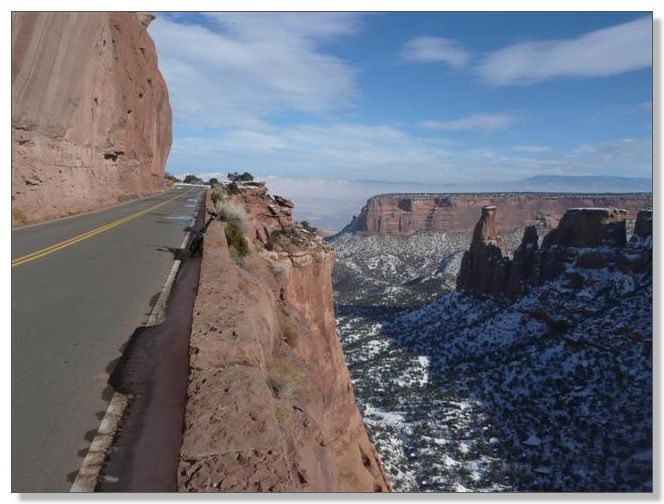 I hit the posted speed limit (and my max of the day) of 35 mph somewhere along this rare dry stretch: 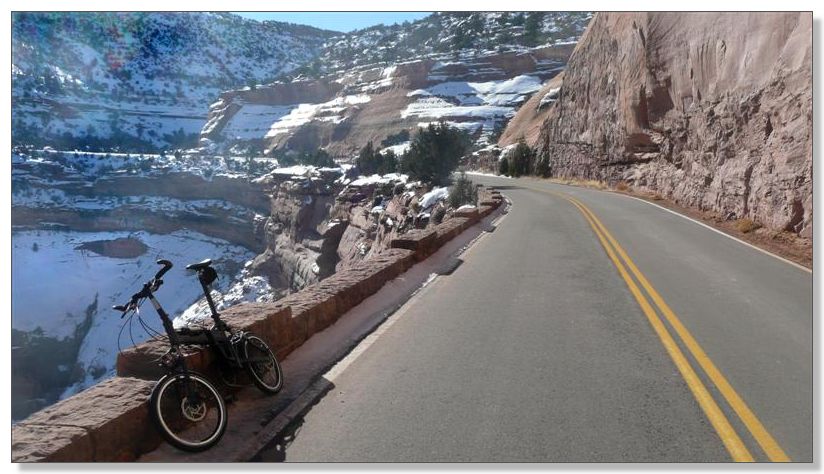 At the 25 mile mark, I reached the visitor center near the Fruita end around 1:30 and had a snack. The woman behind the counter seemed quite surprised that I had ridden over from Grand Junction through the snow, but sold me a Gatorade anyway and wished me a safe trip back: 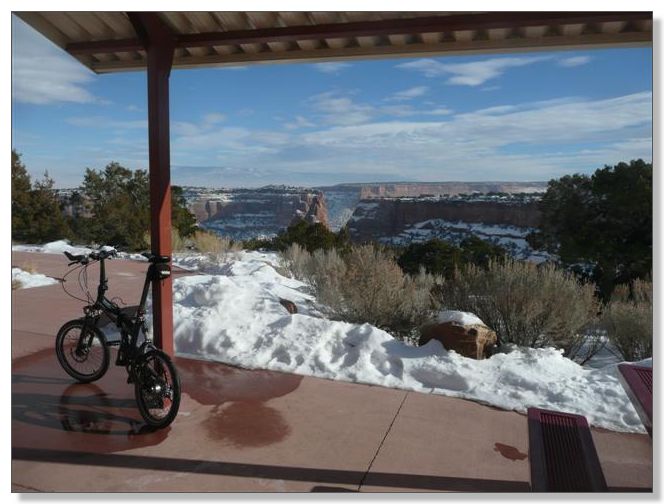 I decided I better skip the final descent to Fruita, as I would probably not make it back before dark if I had to turn around and make that side's 4 mile, 1000 foot climb right back up, so I took in a little more scenery and started the moderate 700 foot grind back to the high point in the middle: 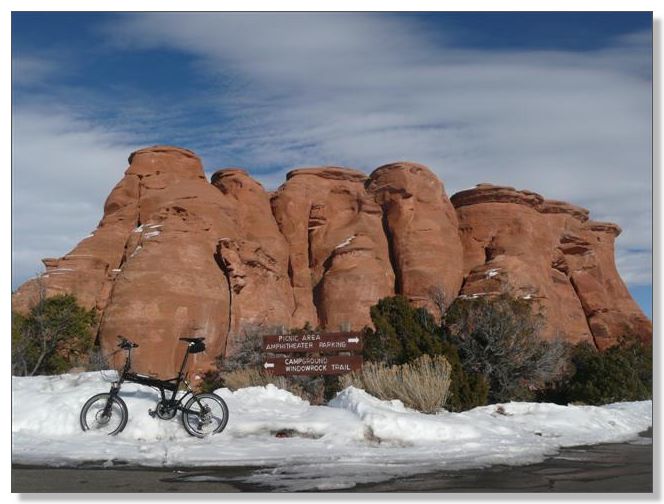 The trip back was considerably more challenging than the trip over had been. The 7 miles of steady "moderate" climbing took its toll on my legs which were now approaching 3000 feet of climbing for the day. But the real bummer was that the thin layer of nice grippy packed snow I had enjoyed in the morning had evaporated by the afternoon, leaving lots of random bare ice slicks and slushy spots to contend with on the long gentle downhill cruise along the rim. That limited me to more like 5-10 mph rather than the effortless 15-25 I had been looking forward to during the climb, but it was still highly entertaining, if a bit slow.

With the sun getting low and the temps dropping back into the 20s, I re-donned all my layers at the aptly-named Cold Shivers Point before starting the steep 4 mile plunge I had climbed in the morning: 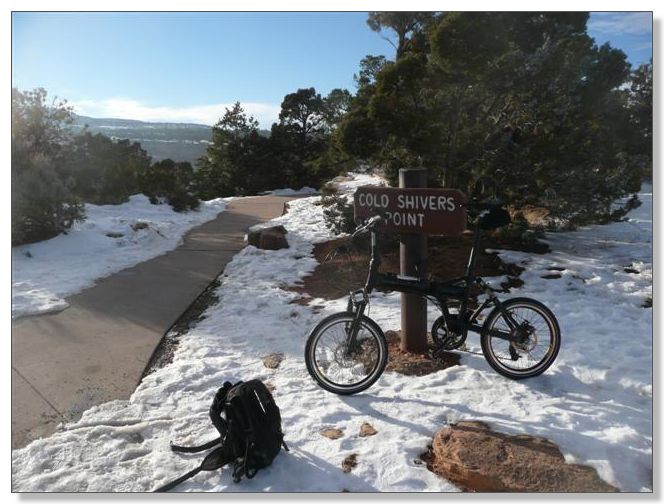 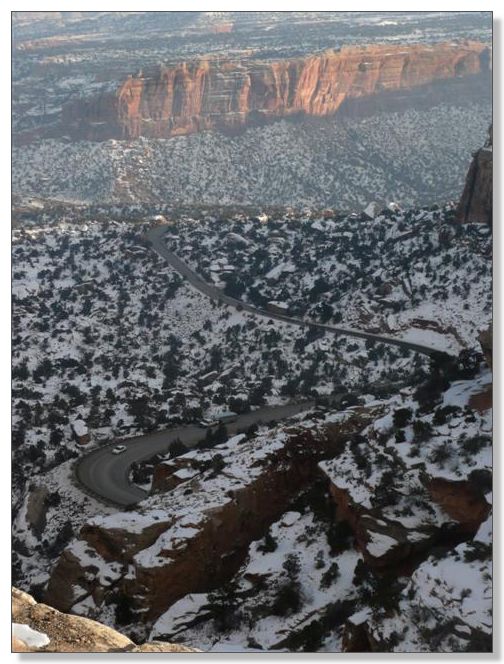 Overall, I thought the bike performed great on its first outing in "road" trim since I got it in September. Fast, stable, solid, all that good stuff. I got back to the motorhome with the odometer showing 50.42 miles and 4:29 of riding, for an average of 11.2 mph. The ice and snow clearly hurt that average by a couple mph, but it made for a beautiful and challenging ride that seemed more like mountain biking than road riding for much of it, so I couldn't complain too much!

Happy New Year, and good riding to all.