Another week, another ride report for ya!  I must say, it's been a fabulously warm and dry October for getting in some "big" rides here in Colorado, and I've been trying to take full advantage. First, some links to earlier installments if you want to get caught up (#1 Kenosha-Georgia, #2 Two Elk, and #3 Curt Gowdy), but otherwise, here's the scoop about my latest little bike adventure, a 30-ish mile exploration of the trails in the foothills west of Fort Collins on Saturday.

After considering the options for doing this ride, I decided to park at the Coyote Ridge trailhead which is sort-of in the middle between the Devil's Backbone trailhead at the south end, and Horsetooth state park at the north end. I figured if I parked at the south end, that would mean I'd have to traverse over the Devil's Backbone portion at the end of what I figured would be a long day, and that was likely to be the hardest part of the ride and I wanted to be fresh for it. 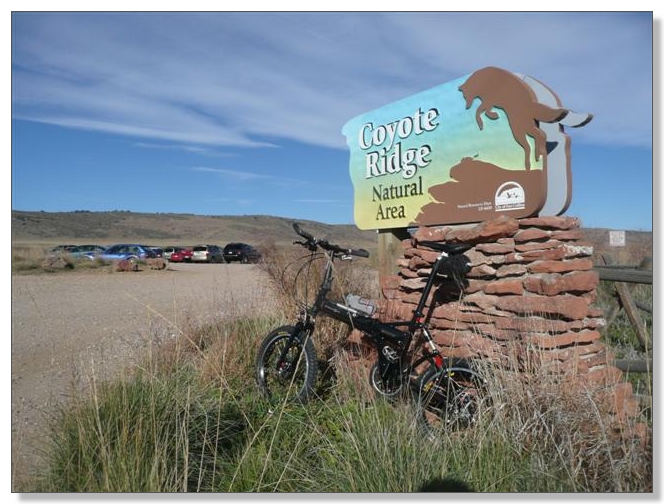 By 10 o'clock I was unfolded and underway. First came an easy roll across a mile or so of gravel road toward Coyote Ridge itself: 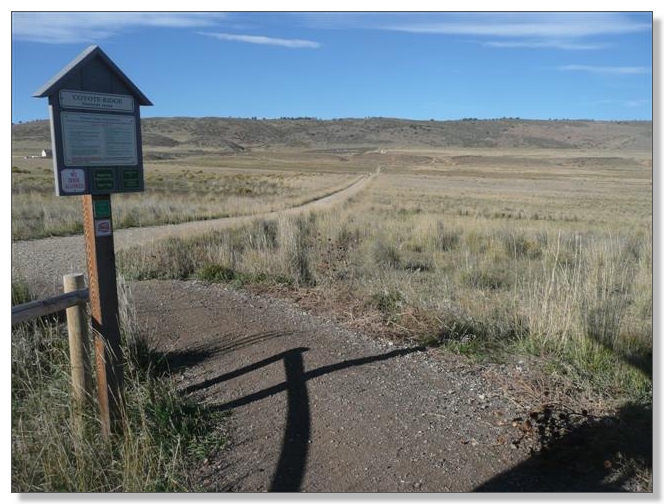 That led past a prairie dog research center, of all things, and soon turned from road to the rocky Rimrock Trail and headed rather steeply uphill. I paused at a switchback and took some pics of a couple of guys alternatively walking and grinding their way up this stuff, then took it on myself, and was pretty pleased to make it up through the rocky soup to the next plateau with only a quick dab. At my pace, it would have probably been faster to walk, but it's always better to roll, right? 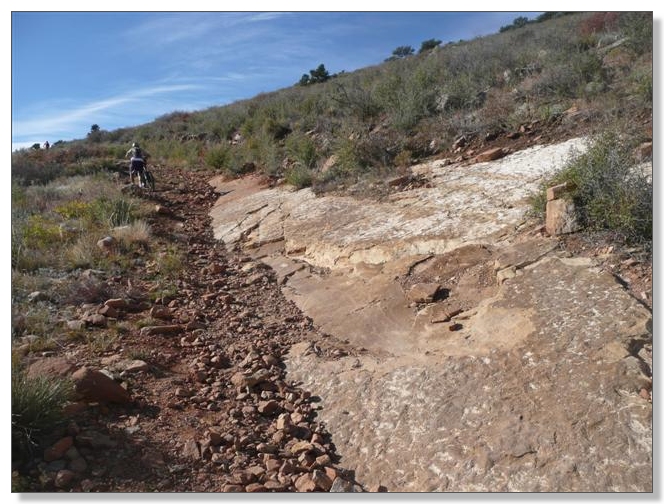 Upon gaining the ridge, I got my first view of the terrain on the other side, and started to understand the topography around here. To get to the "real ride", I'd be descending into the valley on the right, crossing to the next ridge over and climbing that. So much for my plan to have an "easy" way back at the end of the day, but oh well: 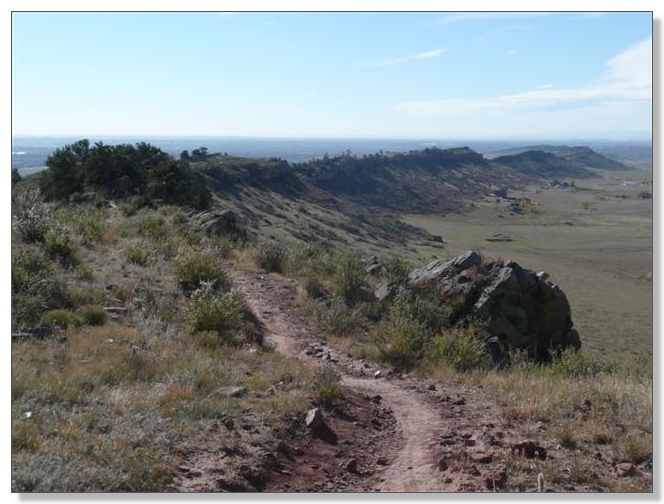 After a fun bit of ridgeline singletrack, this sign appeared: 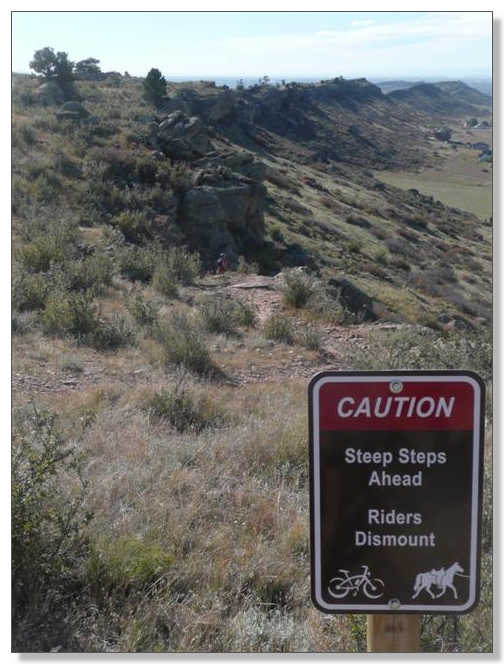 They weren't kidding about the dismounting. I'm sure there's some mtbr mofo out there who rides these

but most people seemed to be doing good to simply carry their rigs up and down: 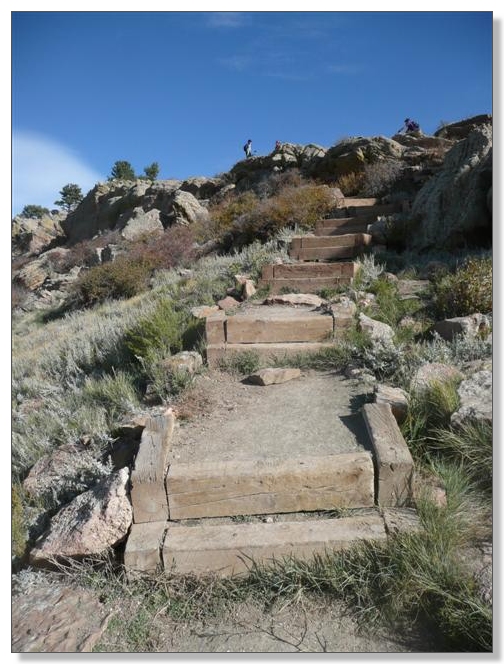 A nice singletrack followed across the valley and eventually connected to a dirt road, with a junction with the Indian Summer trail. I took off south on the road because according to the map, that's where the Blue Sky trail was supposed to be. After a few hundred yards, I decided something didn't seem right about riding road and turned around, figuring I'd go ahead and ride the Indian Summer because at least that would be singletrack. Crested a little rise and encountered two guys I'd been leapfrogging back and forth with since the trailhead. They stopped me and wanted to borrow my pump, as one of them had veered off trail a bit and picked up a cactus puncture. So while he changed a tube and reinflated, I got the scoop on the road versus trail issue from them and figured out that Blue Sky was indeed the road here, but only for a bit, and that Indian Summer is normally better ridden CW. After getting them rolling again, I headed off again down the road and sure enough, it soon turned back to nice singletrack: 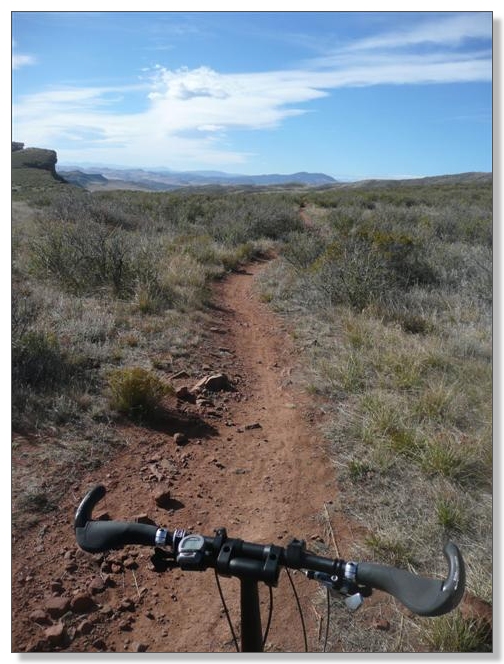 After a while though, that singletrack turned to the distinctive, angled rock tread Devil's Backbone is known for. This made for some slow going, rollin' on 20s as I am, but I thoroughly enjoyed riding this stuff and quickly burned up my breakfast in the process. This was the stiffest test yet for my suspension, and I continue to be amazed at how well it copes with this kind of terrain. Obviously I'm not blasting through like some all-mountain monster bike, but it is really nice to have that front wheel squish down and keep rolling over stuff my old bike would have come to an abrupt stop on: 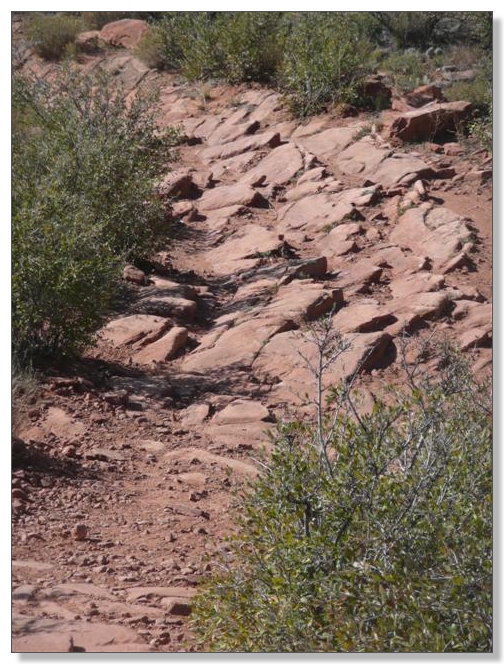 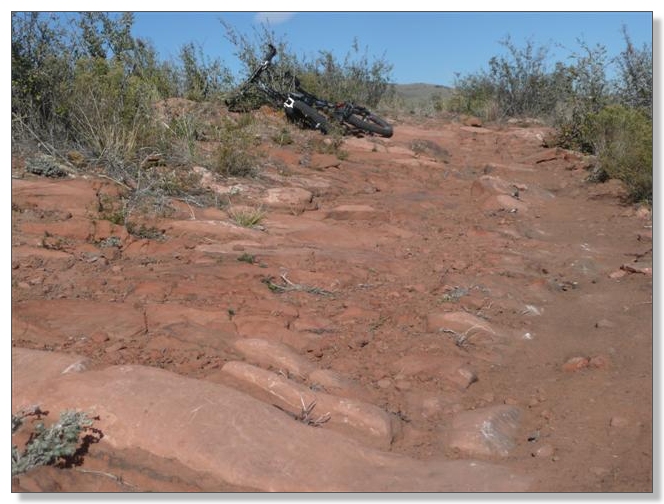 Nice views toward Rocky Mountain National Park from the top of the ridge: 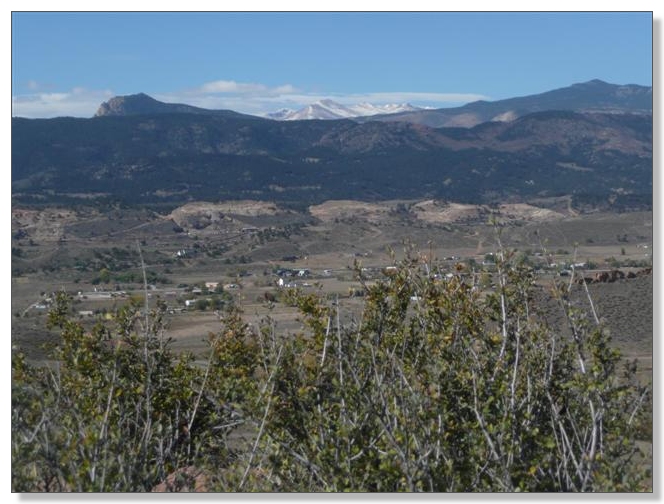 Ah, singletrack snaking into the distance, far as the eye can see.

Speaking of eyes and seeing things, if you look closely at the rock formation in the middle, you can just make out the "keyhole", a feature that's unfortunately accessable only via a "hiker only" segment of trail, as the biking trail skirts somewhat below that funky ridgetop: 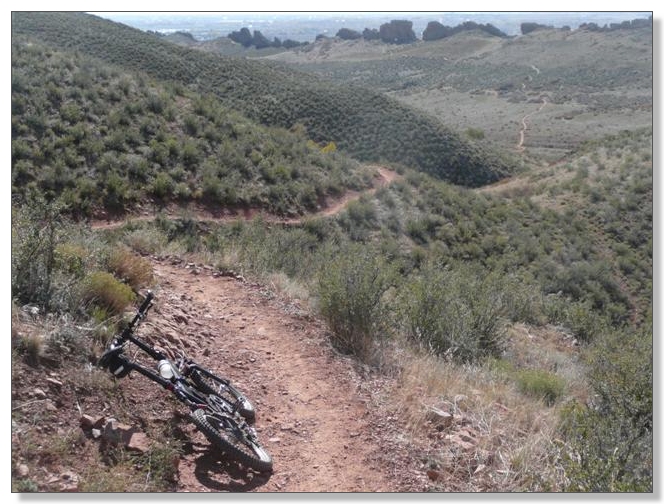 Encountering quite a bit of hiker and bike traffic, I reached the Devil's Backbone trailhead and wolfed down a PB&J sandwich at the pavilion, waved at the two guys I'd helped with the flat who arrived, surprisingly, about 15 minutes after I did, then headed back to the north on the same route: 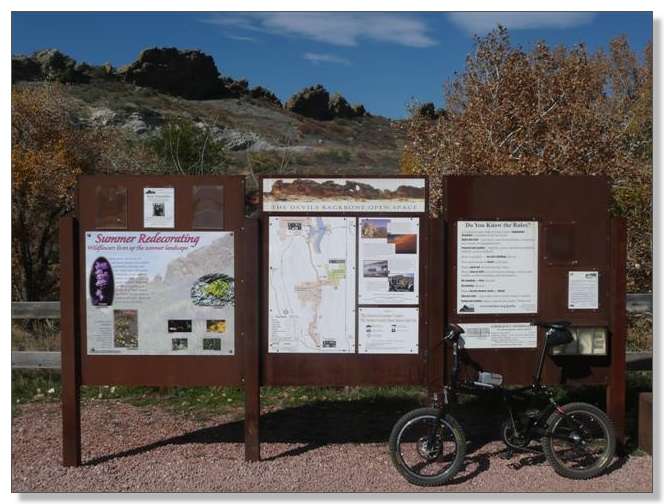 The trail signs along the way are probably the most durable I've ever seen, made of metal bar with text written in weld metal. Very cool: 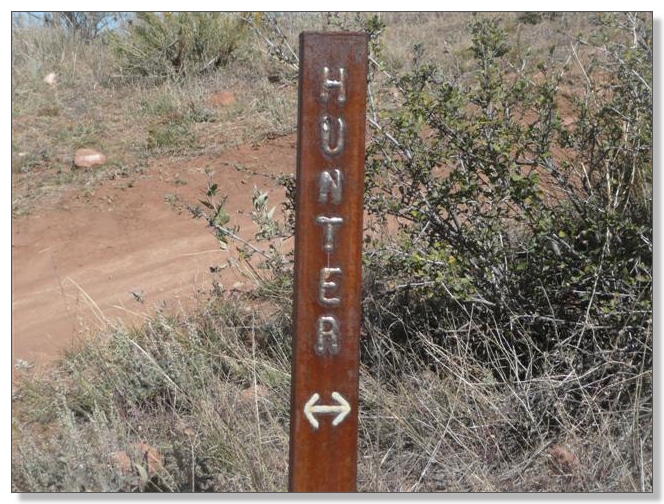 There's only one fork on the backbone that bikes can go either way on. On the way south, I'd taken the western fork, but on the way north, I took the eastern fork, which is marked as "advanced" with a black diamond: 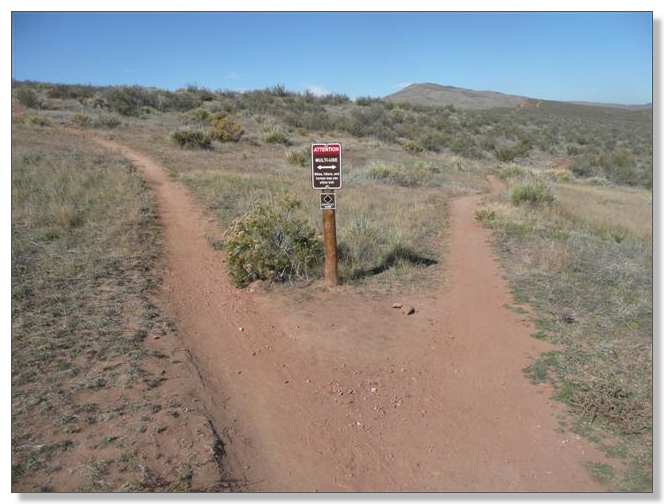 The "non-advanced" fork had been pretty burly riding, with a steepish climb and descent over that angled rock as above. The "advanced" fork was similar tread, but it more-or-less followed the contour line and threw in a couple of seriously gnarly stretches. I carried over a couple of those, but overall I'd say this leg was actually easier than the other one due to less elevation change and somewhat smoother tread: 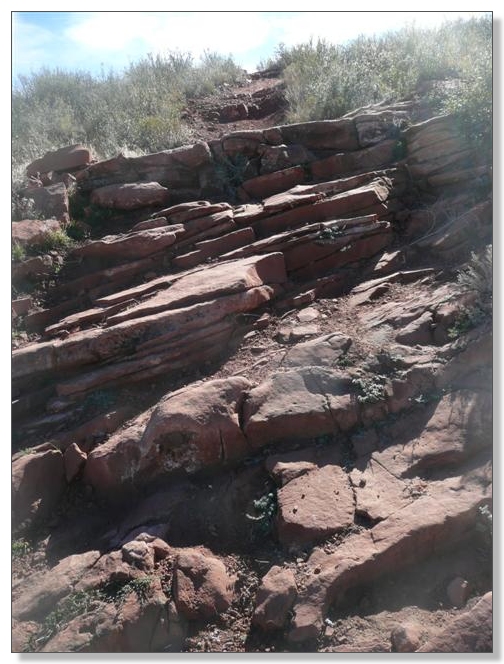 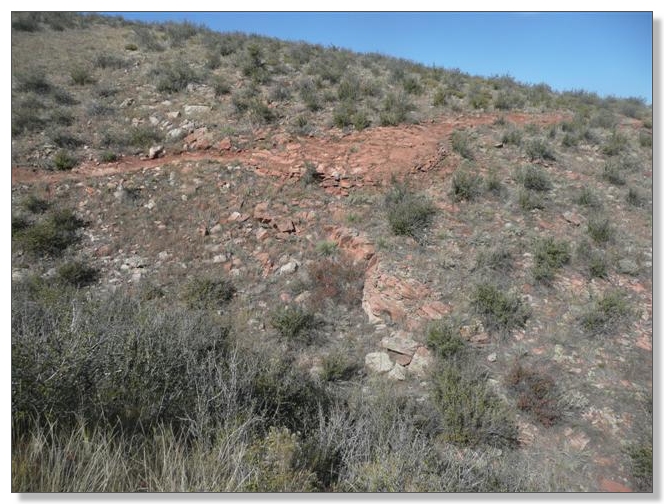 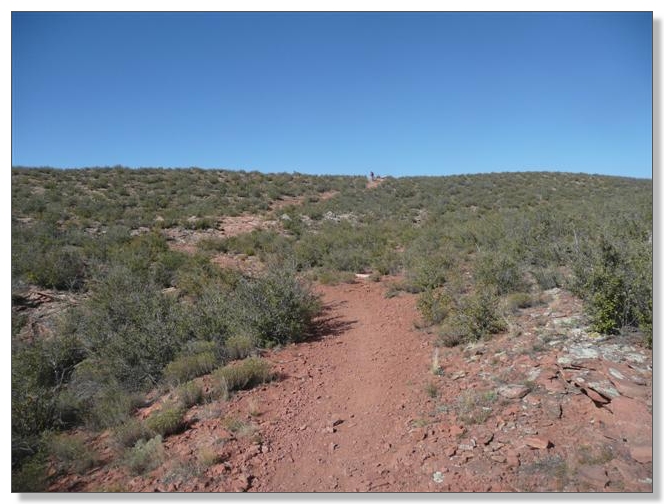 Stopped at this overlook for yet another snack, and chatted with a couple of guys who were wondering about taking a bike like mine in a private plane. I told them that indeed, that's one of the classic niches for folding bikes, along with RV's and boats: 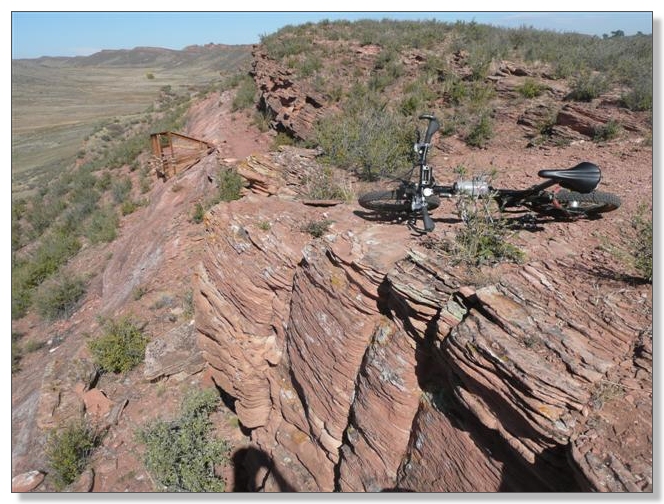 Soon enough I was at the south end of the Indian Summer loop, which started with a moderately strenuous but mostly buff series of switchbacks: 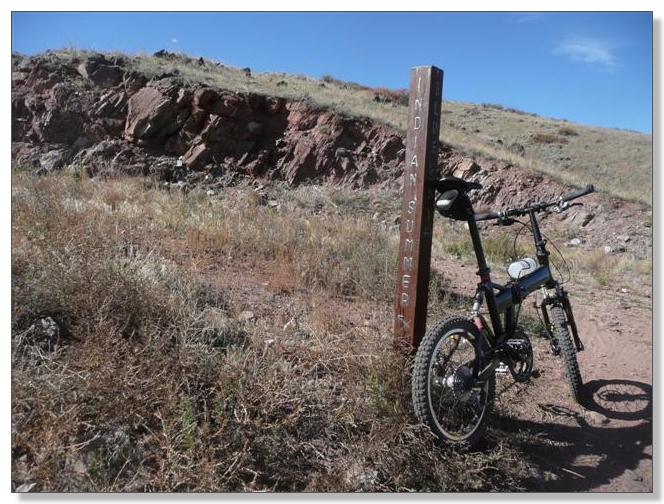 The trail continued to climb steadily, totally out in the open: 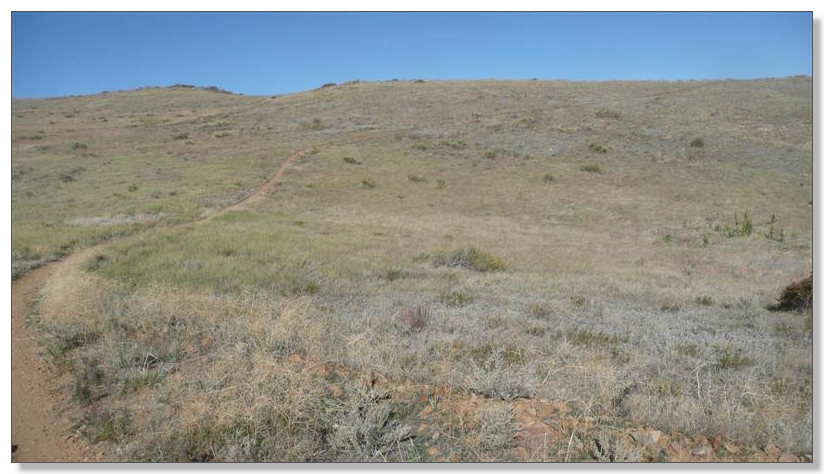 Some strange cactus-like plants appeared. Between those and the blazing sun, I started to feel like I'd somehow gone off course and ended up in Arizona: 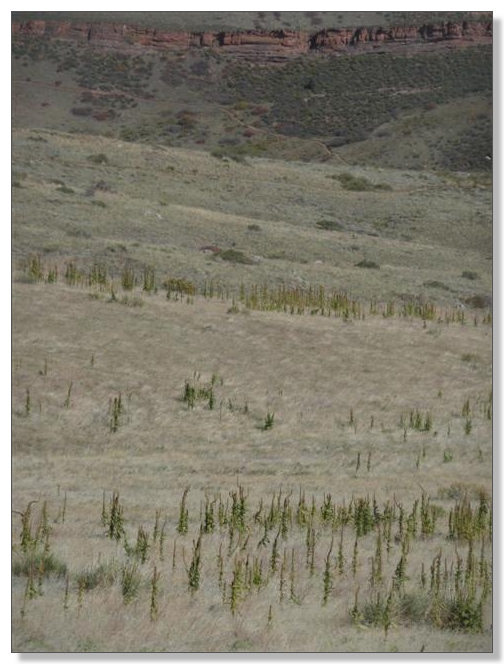 After what seemed like quite a bit of work to reach the top, I finally hit the downhill. This descent was okay, but was over quickly and didn't seem particularly interesting. Overall, I'd say that little side trip was one of those where the down didn't seem worth the up, but hey, maybe I just wasn't going fast enough (the Topeak did register a peak of 25 mph somewhere out here on the singletrack though... 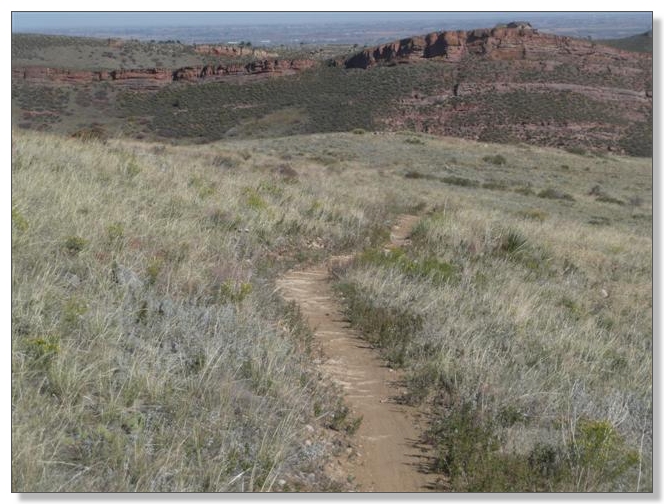 So I continued my retracement of the Blue Sky trail to the north. There's one stiff climb back to the intersection with Rimrock, but otherwise this is a nice cruiser: 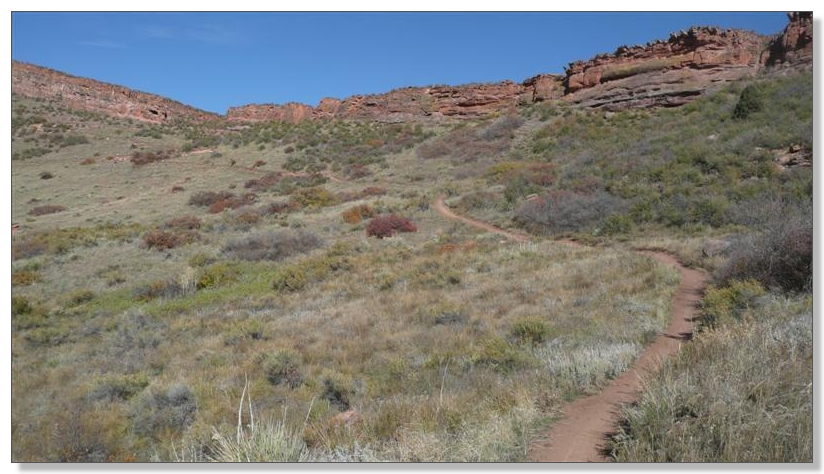 After a quick break at that intersection where people seemed to be coming and going from all directions in steady streams, I took off to the north on the part of Blue Sky that's billed as a sort-of rollercoaster ride. I'm not sure I'd go that far except for a few genuinely swoopy bits at the end, but it was a pretty nice, three mile section: 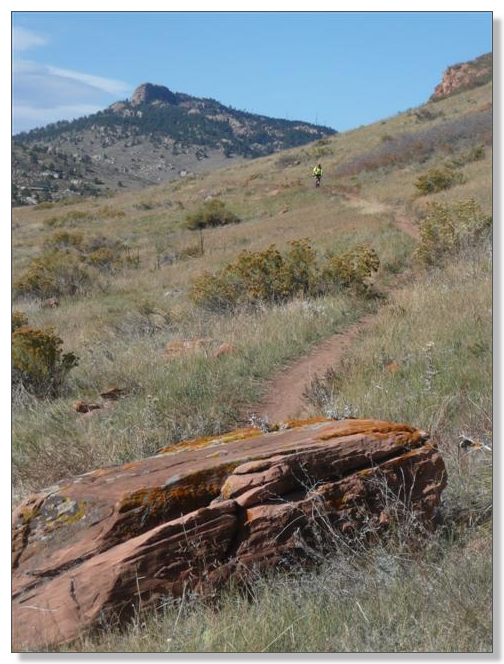 My grand plan for the day had been to head on up to Horsetooth Mountain Park, climb the fireroad to the top, descend Mill Creek Trail to Lory State Park, and loop back via the Nomad Trail. However, after I cruised my way through the campground and across to the Soderburg trailhead, I discovered the water in the park had been turned off for winter, and I was out. Got as far as the intersection below at the start of the big climb and figured I had almost 10 miles to get back to the car and had to go over Coyote Ridge again. Also figured even if I pressed on to Lory and they did have water, it'd be dark by the time I got back, so decided to turn around: 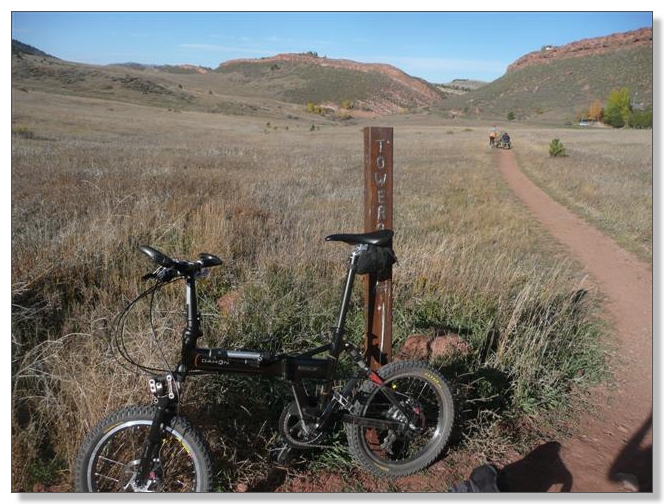 Took a shot of the big tooth, and back I went: 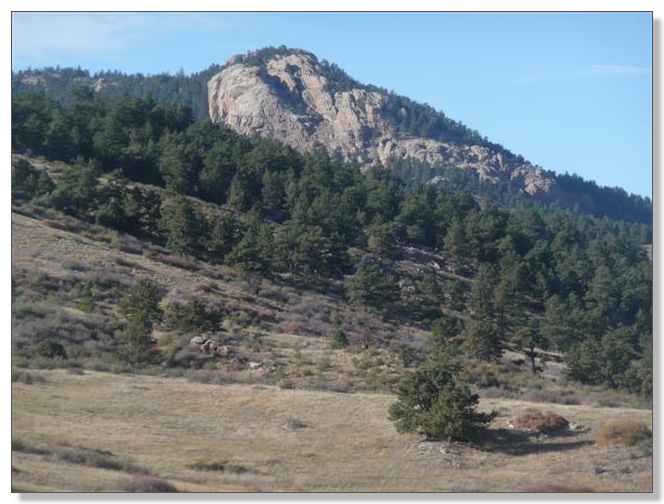 At the campground on Inlet Bay, I found across an outlet that wasn't turned off and refilled my tanks. Now that I had water, I could probably retrace yet again and tour a bit of Horsetooth, but decided I'd just come back one day and do a proper job of that: 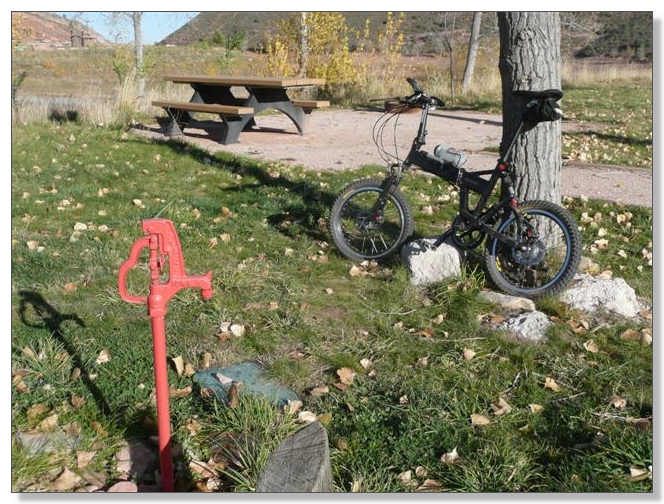 I mostly plodded on the return up Blue Sky trail, feeling uninspired and a bit disappointed about the way this ride was ending. Sure, the legs were a bit cooked from all the rocky climbing on the backbone earlier, but it was more a mental bonk than anything I think: 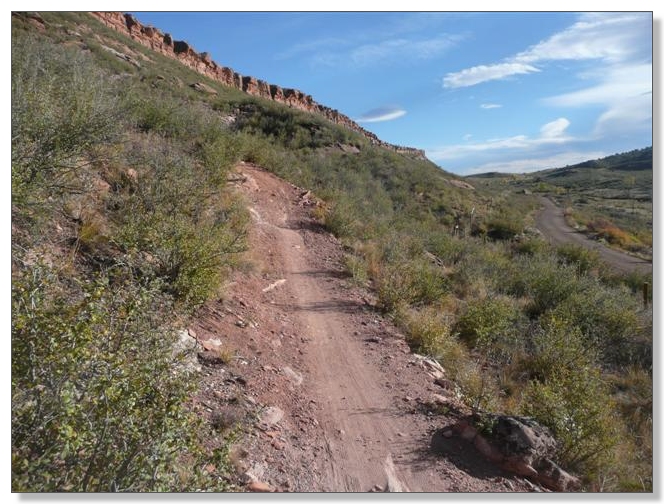 After carrying the bike up that "Hillary Step" like staircase seen above and regaining the Coyote Ridgeline, I took the short, right fork of Rimrock on the way down and found that to be a really nice, challenging little technical descent that kinda woke me up again. After one more short bit of climbine, I gained another ridgeline and was greeted with an incredibly strong crosswind that nearly blew me off the bike several times. It had been pretty breezy all day, but that was pretty exciting stuff.

Made it back to the car a bit after 5pm, with 30.83 miles and 4:31 of ride time on the meter. Now that's still a pretty solid day of riding, especially considering the punishment of the backbone itself, but I was still a little disappointed not to finish the 40 or so as planned. Kind of a strange ride overall. Pretty long and hard, but I didn't get that "out there" feeling much (civilization was almost always within sight) and the out-and-back made for lots of miles that seemed pretty gratuitous.

Still, I really enjoyed the technical stuff in the morning, and wouldn't mind having all this in my backyard, that's for sure. The day did end on a high note however. You see, Schlotzky's ran out of "medium" Jalapeno Cheese bread, so made me two small sandwiches instead. Whoo hoo, fatten me up! 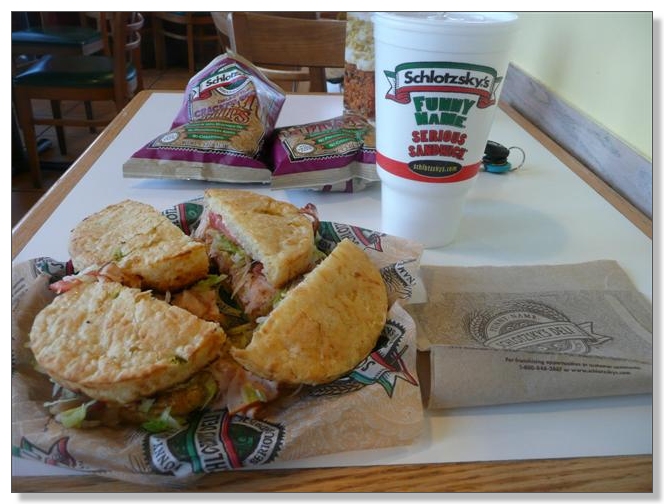